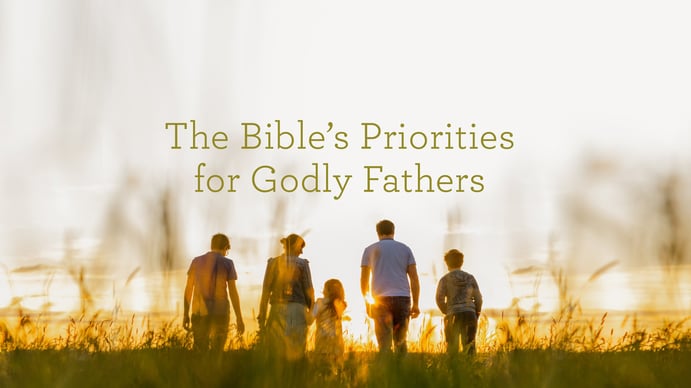 Men are often masters of delegation. Give them a task, and they can quickly assign just the right person to do it. A simple phone call? Let the office assistant make the connection. Household chore? One of the kids can get it done.

Delegation can be a wonderful thing—but what about abdication? What if we assign away our responsibilities?

That is largely the sad state of Christian fatherhood today. Fathers are meant to nurture and admonish their children in the Lord Jesus. In an age of self-promotion and unprecedented leisure time, however, the daily task of fathering has struck too many men as unglamorous. Far too often, we look up and down the pews and see wives, mothers, and single women in our churches, but few fathers.

Learn more about the Bible’s instructions for fathers
Topical Sermons

Many delegating dads have abdicated their lofty seat of authority. They have left their work to others, with disastrous results: rising rates of suicide among minors, criminal activity and violence, drug abuse, and sexual immorality. We have produced a floundering, confused, and self-destructive generation. (This is no overstatement but the conclusion of any number of objective studies.)

Confusion about fatherhood is hardly new, though. When Paul wrote to the church in Ephesus, his words provided a striking contrast to the first-century world of Roman culture. The Roman father was—at least legally speaking—an autocrat. He could order his children around as if they were cattle. The laws backed his ability to sell them as slaves if he so chose. He could even apply the death penalty in cases of extreme discipline.

If we are to prevail in this grand challenge of parenting, we must be in the Lord ourselves.

Against that troubling backdrop, Paul presents a strikingly different parental perspective. He offers a radical suggestion that would cause first-century fathers to shine in a dark time, just as it does in the twenty-first century: “Fathers, do not provoke your children to anger; instead, bring them up in the discipline and instruction of the Lord” (Eph. 6:4, NIV; see also Col. 3:21).

Earlier, Paul had already established that our role model for fatherhood is God the Father Himself (Eph. 3:14–15). The beauty of this principle is that no earthly model is necessary, whether from experience or curriculum. We could be surrounded with the most derelict of fathering role models, and we could still excel.

Let’s discover how we are to set out doing so.

Paul begins with a negative command: “Do not provoke your children to anger”; otherwise, as Paul writes elsewhere, they will “become discouraged” (Col. 3:21).

Few of us would admit to setting out each morning to exasperate or embitter our sons and daughters. Just the same, we often do so without ever intending it. I can think of eight surefire ways I have caught myself provoking my own children to anger:

And this isn’t even an exhaustive list! We can be devilishly creative in the ways we fail God and His desire that we build strong children. We must therefore be all the warier of doing so.

The Care and Feeding of Children

What about the positive side? The alternative, of course, to provoking and discouraging children is encouraging them—namely, by following the biblical command to “bring them up in the discipline and instruction of the Lord.”

The Greek word translated as “bring them up” here is quite crucial; it means to nourish or to feed. The duty of feeding and nurturing the child, in other words, belongs first and foremost to the father. (This in no way demeans or diminishes the critical work of mothers!)

How and what he feeds them will be noted by a father’s children. For example, if the father continuously feeds and nurtures his children’s mental development by reading books, asking questions, and spurring them to think, the children generally strive to grow mentally.

If spirituality is not a priority in the balanced diet of a family, we cannot expect our children to gravitate toward spiritual values for sustenance.

The food he considers nonessential will be noted as well. What if the father only occasionally serves up the spiritual meal? Children’s eyes miss nothing. They know ambivalence when they see it. If spirituality is not a priority in the balanced diet of a family, we cannot expect our children to gravitate toward spiritual values for sustenance as they begin to grow and reach out to feed themselves.

Alongside the idea of feeding and nourishing, Paul places two more key words. The first is “discipline,” and the best picture of what it means can be found in the book of Hebrews:

They disciplined us for a short time as it seemed best to them, but he disciplines us for our good, that we may share his holiness. For the moment all discipline seems painful rather than pleasant, but later it yields the peaceful fruit of righteousness to those who have been trained by it. (12:10–11)

Children often miss the double meaning here: discipline can be just as unpleasant for the one who disciplines as it is for the one who is being disciplined. Yet, Paul says, the responsibility cannot be evaded. Training, if it is to have integrity and be effective, always involves rules, regulations, rewards, and punishments. (See Proverbs 13:24, 22:15.)

Still, discipline has its limits. Sometimes parents simply must punish wrongdoing. Sometimes, though, we should never punish, such as when we are annoyed, our pride is hurt, or we have lost our temper. When we make this common but damaging mistake, it is important that we find our children before bedtime, draw them close to us, apologize, and ask for their forgiveness. As fathers, we should always have the humility to apologize to our children when we have wronged them.

If “discipline” is what we do with the child, then “instruction” has to do with what we say. “Instruction” means laying down principles that a child’s mind can understand, framing their tiny lives with boundaries and standards.

Sunday school instruction is wonderful. Instruction at godly Christian schools is beneficial, too. Ultimately, though, the responsibility of guidance rests with the father. If his instruction is godly and complete, the result will be a well-rounded child able to weather life’s storms.

Some may say that a father’s godly training and instruction mean that he is “invading his child’s mind.” This is patent hogwash, just as it has always been. Children need to have their minds invaded. (So do adults for that matter!) Children need not indoctrination but stimulation. Because they are naturally fascinated by the issues that fascinate us, we need to instill our own excitement for the things of God in them.

Now, it must be stated that children need enough “wiggle room” to wrestle with issues themselves. The dinner table should be a place where questions can be asked and doubts expressed. Children must have the opportunity to make their beliefs their own as they work out their faith with fear and trembling—all under the watchful eye of a loving father.

The last three words of Paul should not be passed over easily: “of the Lord.” Taken together, these three words are the last word. When all is said and done, all our discipline and instruction must be done in the Lord—and if we are to prevail in this grand challenge of parenting, we must be in the Lord ourselves.

We will teach our children many things, from baseball to baking and from fishing to fashion. Our lessons will range from the sublime to the ridiculous. Underlying it all, though, is the lordship of Christ. Fathers are teachers, but God is the principal. When we exercise discipline, it should be God’s discipline—and when we smile with pride at our children, we know that God smiles with us.