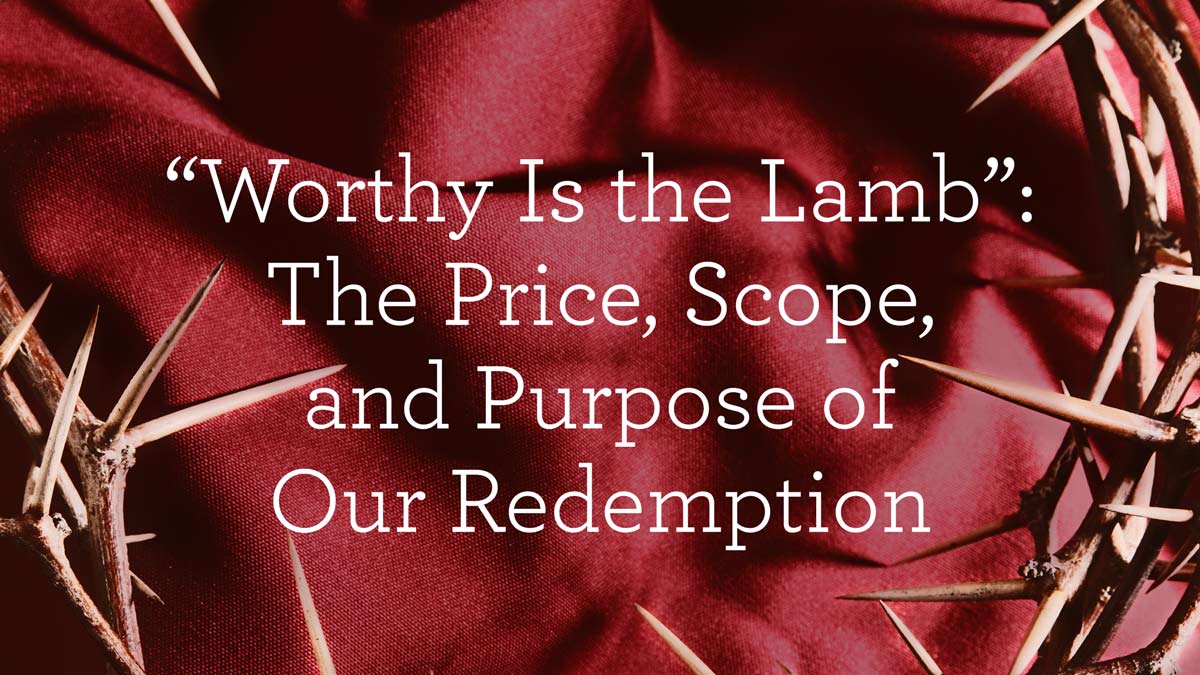 Too often, we regard the book of Revelation as if it were a collection of riddles—some kind of theological Rubik’s Cube that must be deciphered by making all the colors match on every side. But this shouldn’t be the case.

In the big picture of the book, the apostle John writes so that his original hearers, as well as the church across time, might know that Jesus Christ triumphs over all opposition as Lord and King. John doesn’t write so that the armchair theologian can speculate with charts and graphs. He writes so that Christ’s church might taste the glorious hope we have in the Lamb who was slain.

John doesn’t write so that the armchair theologian can speculate with charts and graphs. He writes so that Christ’s church might taste the glorious hope we have in the Lamb who was slain.

Revelation 5, especially, offers us this bigger picture. In it, we see with the apostle John the price, the scope, and the purpose of Christ’s redeeming work, all as praise resounds through the halls of eternity.

John’s vision in chapter 5 opens with a problem: there is a scroll that contains God’s plans for judgment and redemption, but none can be found to open it. After John weeps at this tragedy, an elder points him in a new direction, and this is what his eyes behold:

Between the throne and the four living creatures and among the elders I saw a Lamb standing, as though it had been slain, with seven horns and with seven eyes, which are the seven spirits of God sent out into all the earth. And he went and took the scroll from the right hand of him who was seated on the throne. And when he had taken the scroll, the four living creatures and the twenty-four elders fell down before the Lamb, each holding a harp, and golden bowls full of incense, which are the prayers of the saints. And they sang a new song, saying,

“Worthy are you to take the scroll
and to open its seals,
for you were slain, and by your blood you ransomed people for God
from every tribe and language and people and nation,
and you have made them a kingdom and priests to our God,
and they shall reign on the earth.” (Rev. 5:6–10)

In this passage, God presents John and us with images that are familiar from the Old Testament: the Passover lamb from Exodus 12 and the Suffering Servant from Isaiah 53. The Old Testament worshipper was accepted on the basis of the sacrificed lamb, and the New Testament worshipper—that’s us!—is accepted on the basis of the Lamb that has been slain, Jesus Christ.

The seven horns are an indication of (perhaps among other things) Jesus’ power and majesty, the seven eyes a reminder of His omniscience. For all our lingering questions, we should not miss what is plain and central: this Lamb confronts us as the only one who is able to take the scroll, open it, and explain human destiny. And not only that, but the one found worthy is also the one who was slain. Christ’s blood paid the price of our redemption.

For whom did the Lamb pay the price of His blood? John tells us that those gathered around the Lamb’s throne sing, “You were slain, and by your blood you ransomed people for God from every tribe and language and people and nation.” These ransomed ones are identified in 7:13–14 as the ones whom Christ has set free from the clutches of sin and death. Having been purchased by His blood, they are now cleansed of iniquity and clothed in Christ’s righteousness.

We like to think that Jesus had us in mind as He gave Himself up. In one sense, that’s true enough. Part of the “joy that was set before him” that enabled Jesus to endure the cross (Heb. 12:2) was surely a vision of His redeemed from all corners of the globe. Yet in the end, it wasn’t our need that compelled Him; it was the satisfaction of the Father’s justice. He made atonement for our sins, but His focus was always on the Father. He purchased a people for God.

Notice also that we will reign on the earth. Quite frankly, most of the hearsay about heaven—harps and clouds and alabaster walls—isn’t all that thrilling. Thankfully, those things have more to do with Victorian Christianity and Platonic views of the universe than with a rigorous, thoughtful consideration of what God really intends.

God’s ultimate purpose was not Adam and Eve in the garden; it was Christ in Gethsemane, Christ on the cross, Christ at His throne.

Creation groans now, and we with it (Rom. 8:22–23), but in the new heavens and the new earth, our world and ourselves will be as God desires. All the things that we have enjoyed in a fallen world will be rectified: friendships, food, music—even golf! (Okay, maybe not golf.) All of it will be as it ought. God’s ultimate purpose was not Adam and Eve in the garden; it was Christ in Gethsemane, Christ on the cross, Christ at His throne. We will worship the Lamb with His redeemed for all eternity, and we will do so on a restored earth that will be ours to work and keep and cultivate for God for all eternity.

The main thing and the plain thing from Revelation is essentially this: Jesus wins. Jesus triumphs! Whether in the first century or the twenty-first, opposition and persecution can cause us to think, We’re finished. We’re getting smaller by the day. Jesus was here, but He’s gone. He said He would come back, but there’s no sign of Him. Resistance to the Gospel grows by the minute. For all its apocalyptic imagery, Revelation assures us that the Lamb conquers. Christ and His people will indeed face enemies, but “the Lamb will conquer them, for he is Lord of lords and King of kings” (Rev. 17:14).

Revelation 5 offers us a vision of ever-expanding praise as the Lamb conquers.

Here John gives us a picture of absolute, total triumph—basically, Philippians 2:10–11 dramatized: “that at the name of Jesus every knee should bow, in heaven and on earth and under the earth, and every tongue confess that Jesus Christ is Lord, to the glory of God the Father.”

This glorious, future hope stretches back to reach us now and motivates us to press on. Today, as individuals and as the church, we might feel feeble and frail. But in no time at all, we will join with the company of the redeemed from all over creation, and we will sing the praises of our slain Lamb on a restored and renewed earth forever and ever.

This article was adapted from the sermon “Lamb on the Throne” by Alistair Begg.