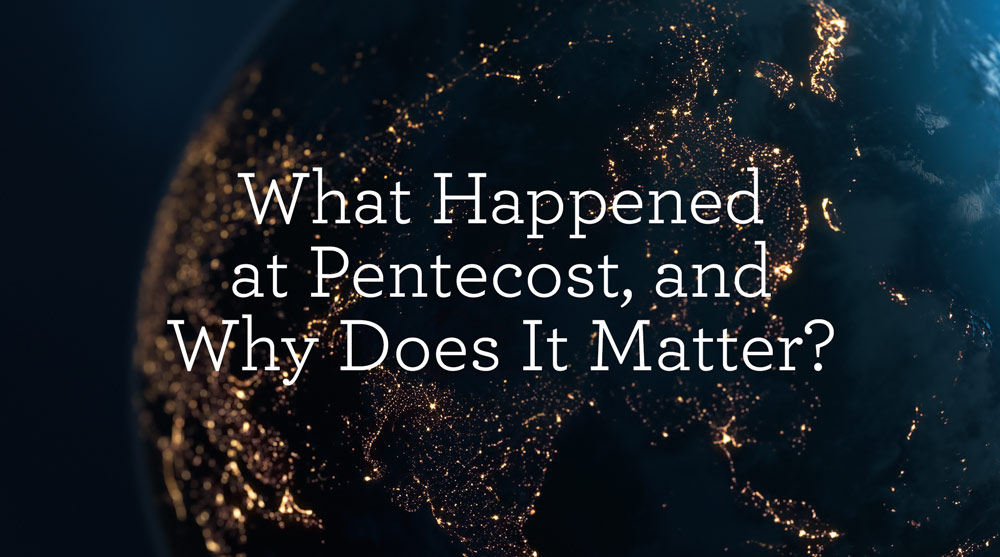 At His first coming, our Lord Jesus Christ inaugurated His kingdom on earth. The disciples expected a triumphant king, but instead, Jesus likened His kingdom to a mustard seed that expands progressively and grows organically (Matt. 13:31–32).

The church now occupies the time when the kingdom comes progressively as the word of the Gospel goes out to the ends of the earth. Christ has ascended and sent His Spirit, and so we live between two fixed points: Pentecost and the Parousia (Christ’s second coming). During this time in between, we are to advance the Gospel until Jesus returns. Only then, at His final advent, will Christ’s kingdom come universally.

If we want to understand our place in redemptive history, then we ought to understand something of that first point of our period in salvation history: Pentecost. Only when we begin to grasp the events of that momentous day recorded in Acts 2 will we comprehend our mission between the times.

To understand Pentecost, we have to consider the conversation that sets up the story. Just before the Lord Jesus ascended, the apostles asked Him, “Lord, will you at this time restore the kingdom to Israel?” (Acts 1:6). Jesus responded, “It is not for you to know times or seasons that the Father has fixed by his own authority” (v. 7).

Even after the resurrection, the apostles expected a triumphant kingdom to break in. But the book of Acts goes on to describe the progressive expansion of the kingdom not by force but by the preaching of the Gospel. In Acts 1:8, Jesus provides the framework for the entire book: “But you will receive power when the Holy Spirit has come upon you, and you will be my witnesses in Jerusalem and in all Judea and Samaria, and to the end of the earth” (emphasis added).

After this, the apostles were left “gazing into heaven” upon witnessing Christ ascend (v. 10). They were also left waiting for the Holy Spirit, as the Lord instructed them (v. 4).

What Happened at Pentecost?

Pentekoste—Greek for “fiftieth”—was the second of three great annual festivals that brought Jews from all over the world to Jerusalem. Fifty days after the Passover, many would make their pilgrimage to celebrate Pentecost, which was a time of thanksgiving and praise to God for the first wheat harvest of the season. Acts 2:1–4 describes what happened on that day when God poured out His Spirit on the apostles:

When the day of Pentecost arrived, they were all together in one place. And suddenly there came from heaven a sound like a mighty rushing wind, and it filled the entire house where they were sitting. And divided tongues as of fire appeared to them and rested on each one of them. And they were all filled with the Holy Spirit and began to speak in other tongues as the Spirit gave them utterance.

We can describe what took place at Pentecost using four adjectives.

Pentecost was unmistakable because of its three distinct phenomena, which served to make it perfectly clear that Jesus had indeed come to His people by His Spirit.

First, there was an unmistakable “sound like a mighty rushing wind” that “filled the entire house” where the believers had gathered. Second, there were what seemed to be “tongues … of fire” dividing and resting upon them individually. And third, being “filled with the Holy Spirit,” the believers “began to speak in other tongues”—that is, languages other than their own—“as the Spirit gave them utterance.”

Each of these signs by itself would have been miraculous. Taken together, they leave us without question that God did a mighty work by His Spirit.

Pentecost was also unconditional. There was no requirement, no description of process, no indication of pattern. Rather, God acted irrespective of any man-made conditions.

This has to be pointed out because from time to time, people will say, “Well, you see, if we are really going to be Holy Spirit people, then we would have to go back through the same process, the same pattern, and fulfill the same conditions as the early church.” But that was simply not the case with Pentecost. If there was any condition, it was the condition to wait—which could hardly be described as any real condition at all.

Pentecost was also unavoidable in the sense that what happened in the house where they were gathered spilled out into the community. The rushing wind, the tongues of fire, and the new languages being spoken caused such a commotion that the “devout men from every nation under heaven” could not avoid the hubbub (Acts 2:5) and began hearing “the mighty works of God” in their own languages (v. 11).

Upon hearing, some “were amazed and perplexed” (v. 12), while others mocked (v. 13). Nevertheless, none could avoid the events of Pentecost.

Lastly, we need to view the miraculous events of Pentecost in terms of the whole story of Jesus—His incarnation, death, resurrection, and ascension. When we do, we see that Pentecost is unrepeatable.

Neither the death of Jesus nor His ascension is a repeatable event. The same is true for Pentecost. This is not to say that the experience of God the Spirit in the life of the church was somehow locked two thousand years ago. But at Pentecost, when the river was opened and the pouring out took place in this unmistakable, unconditional, unavoidable fashion, it was also done in an unrepeatable way. There is no need for a second Pentecost.

The Good News of Pentecost

All that unfolded at this particular Pentecost surely was equal parts spectacular and confusing. The apostle Peter heard the questions and cries from the crowd and quickly went on to explain the events that had just happened:

“This Jesus God raised up, and of that we all are witnesses. Being therefore exalted at the right hand of God, and having received from the Father the promise of the Holy Spirit, he has poured out this that you yourselves are seeing and hearing.” (Acts 2:32–33)

Just as Jesus had abstained from earthly ministry until His baptism, when the Holy Spirit came upon Him, so He had made clear to His followers, You need divine enablement for understanding and proclamation. He had anticipated and promised the Spirit in His own ministry (Luke 24:49; John 14:26).

When Peter quoted from Joel 2:32 (Acts 2:16–21), he showed that Pentecost was in God’s plan all along and highlighted the very best news of his day and ours: “It shall come to pass that everyone who calls upon the name of the Lord shall be saved.” Amid the chaos and upheavals of life, we can yet find gladness in God’s presence when we call upon the name of Jesus Christ.

Acts 2:37–39 then shows us what it looks like to “call upon the name of the Lord” in more detail. The Jews who were “cut to the heart” asked Peter and the apostles, “Brothers, what shall we do?” Peter responded, “Repent and be baptized every one of you in the name of Jesus Christ for the forgiveness of your sins, and you will receive the gift of the Holy Spirit” (emphasis added).

To repent is more than simply being sorry for your wrongdoings. It means changing your mind about sin itself. It means viewing sin the way God does: as having overstepped His boundaries and missed the mark. It means acknowledging the wrong direction you’ve been going. It involves a change of heart, a change of mind, and a change of direction. Baptism, meanwhile, is the unashamed public announcement that you’re fully committed to a new life in Christ.

When we call upon the name of Jesus, God offers us a whole new start, a whole new beginning. God can give us that fresh start because He grants the Holy Spirit to come and live in us. Notice, though, that this new beginning is for “those who received his word” (v. 41, emphasis added), not for those who merely heard it. You see, the Bible does not teach that you are automatically forgiven just because Jesus died on the cross. You must individually receive Christ and make Him your own.

With the coming of the Spirit and the forgiveness of sins being proclaimed in at least fifteen languages (Acts 2:9–11), Pentecost was essentially a reversal of what had happened at Babel, when human languages were confused and the nations were scattered (Genesis 11:1–9). On that unforgettable day in Jerusalem, the language barrier was supernaturally overcome as a sign that the nations would be gathered together in Christ.

Instead of assimilating all of God’s people under a common tongue, Pentecost makes clear that every language is an appropriate vehicle for the praise and the proclamation of Jesus. This is one reason we have groups like Wycliffe Bible Translators: so that the heart language of men and women may be able to receive this fantastic news, just as at Pentecost. We don’t want people to have to learn English in order to discover “the mighty works of God” (Acts 2:11). We want even the most remote, unreached people groups to rejoice in God with us in their own unique languages.

Ultimately, this is why Pentecost happened, why God has left us His Spirit: so that we can continue the great work of proclaiming the good news of the Gospel to the ends of the earth. One day, we will see with the apostle John “a great multitude that no one could number, from every nation, from all tribes and peoples and languages.” And these people of every tongue will be singing the same song together: “Salvation belongs to our God who sits on the throne, and to the Lamb!” (Revelation 7:9–10).

This article was adapted from the sermon “Pentecost” by Alistair Begg.