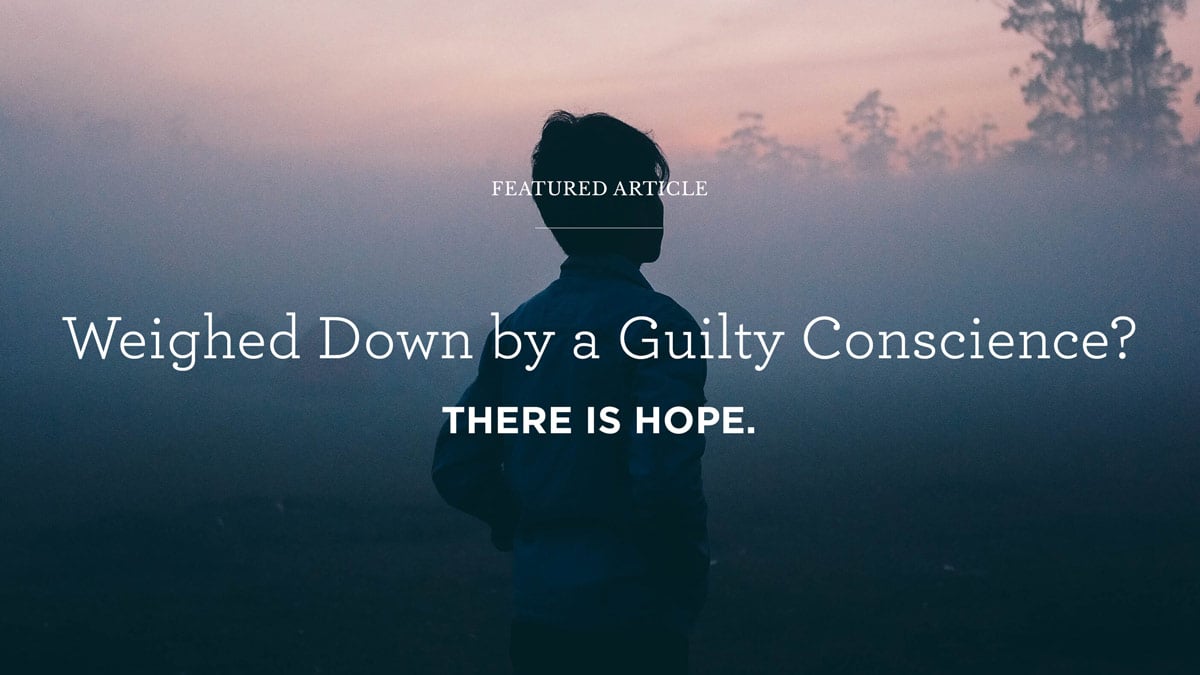 The central message of the book of Hebrews is the superiority of Jesus Christ. Chapter after chapter declares that Jesus surpasses all that came before Him and all that exists in creation. This glorious truth leads the writer to conclude that the new covenant Jesus inaugurated is superior to the old covenant with its laws, regulations, priests, and sacrifices—including in the way it deals with a guilty conscience.

The conscience is a faculty that enables us to apprehend God’s moral demands. God has hardwired each of us with a sense of right and wrong and a sense of guilt for having done wrong. He gives us this sense of guilt not to demoralize us but to make us aware of our need for a solution.

This was true under the Mosaic covenant of ancient Israel, and it remains true in the twenty-first century. The old covenant had an incomplete answer for the guilty conscience, offering temporary purification from sin and temporary relief from guilt. But if the old covenant could do this, the writer of Hebrews declares, “how much more will the blood of Christ, who through the eternal Spirit offered himself without blemish to God, purify our conscience from dead works to serve the living God” (9:14).

What is it, then, that makes the new covenant so much better for the conscience?

In the old covenant, access to God was restricted. God’s people could approach Him only through the priests, who would offer sacrifices on behalf of the people. Once a year, the high priest could enter the presence of God in the temple’s inner sanctuary, the Holy of Holies, on the Day of Atonement. The rest of the time, though, God’s presence was simply not available to the Israelites, and they depended on the priests to intercede on their behalf for their guilty consciences.

But under the new covenant, we read, “we have confidence to enter the holy places by the blood of Jesus” (Heb. 10:19). The guilty can now avail themselves of the access gained by Christ and turn directly to God’s heavenly throne of grace. Even better, this access is for all God’s people, and it is available not once a year but continually, because Jesus Christ—the Great High Priest who was Himself the sacrifice—offered His own blood to atone for sins. When Christ died, the curtain that prevented access to the Holy of Holies was torn in two (Matt. 27:51; Mark 15:38; Luke 23:45), symbolizing the access Christ won for every guilty conscience to come to God through Him.

The separation between God and humankind was not chiefly about a curtain, though; it was about the sinfulness of human hearts. This is why under the old covenant, “gifts and sacrifices are offered,” along with other rites concerned with “food and drink and various washings.” All this was for the cleansing of the people—but none of it could “perfect the conscience of the worshiper” (Heb. 9:9–10).

Herein lies the bad news of the old covenant: “It is impossible for the blood of bulls and goats to take away sins” (Heb. 10:4). The old covenant’s sacrificial system could not do away with sin finally and fully, so it could not finally ease the pain of a wounded conscience. The sacrifices might quiet the guilty conscience for a time, but their repetitiveness ultimately served as “a reminder of sins” (Heb. 10:3), which continued to spring from the well of the human heart. For a conscience to be cleansed and free from guilt, sin would have to be fully and completely washed away.

The conscience is not merely quieted in the new covenant; it is purified and cleansed to the full.

This is what the new covenant does. The blood of bulls and goats offered a partial and temporary cleansing, but the blood of Christ secures an eternal redemption. His sacrifice alone can “purify our conscience from dead works to serve the living God” (Heb. 9:14). The conscience is not merely quieted in the new covenant; it is purified and cleansed to the full.

The result of sin in the human heart is judgment before the throne of God. As the old covenant could only partially cleanse sin, it could only offer limited pardon before God’s judgment seat. An Israelite could breathe a sigh of relief on the Day of Atonement, but the very next day would present a problem: more sins that produced yet more guilt before God and that required yet more sacrifice. Thus a priest would be “daily at his service, offering repeatedly the same sacrifices, which can never take away sins” (Heb. 10:11).

The old covenant was an exercise in bailing water—but Christ came to finally stop the leaks. When He appeared, He “offered for all time a single sacrifice for sins” (Heb. 10:12). He entered not annually but “once for all into the holy places” and “by means of his own blood, thus securing an eternal redemption” (Heb. 9:12). He does not need to offer Himself again and again, because “by a single offering he has perfected for all time those who are being sanctified” (Heb. 10:14). All who call upon His name are fully pardoned, and they are always pardoned. You can wake up tomorrow morning knowing with certainty that your sins are forgiven and your conscience is clean.

The Way to a Clean Conscience

If you know the Lord Jesus, then maybe you’ve at times forgotten all that is yours in Him. Do you approach the throne of grace with boldness and confidence? Do you trust that the Lord cleansed you from all unrighteousness when you turned to Him in repentance? Do you rejoice that your pardon is complete and that every last sin has been nailed to the cross? Perhaps you are tempted to self-sufficiency and self-condemnation—but the truth is that your sins were grave enough to require a sacrifice and that Christ’s sacrifice was enough to render you fully forgiven.

In Christ alone, you can find forgiveness that is full, final, and free.

And if you feel the weight of a guilty conscience—if you are prepared to admit that you have unrelieved, unmitigated guilt and you have not been able to satisfy it—then perhaps today is day of salvation for you. In Christ, and in Him alone, you can find forgiveness that is full, final, and free. There is a way to have your sins forgiven. That way is the Lord Jesus Christ, the true and better sacrifice.

This article was adapted from the sermon “The Cleansing of Conscience” by Alistair Begg.