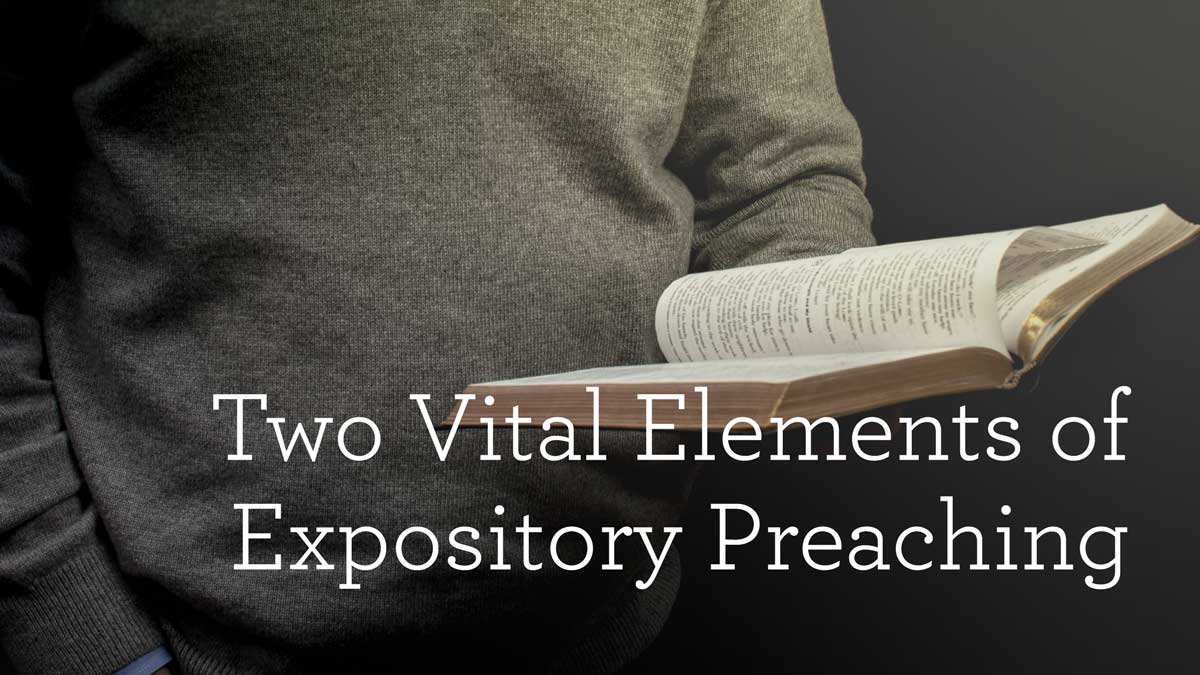 William Still was a minister in Aberdeen, Scotland, who was known for his commitment to expository preaching. It’s been said that on one occasion, a visitor to Still’s church greeted him at the conclusion of the service and said to him, “But Mr. Still, you don’t preach.” Still asked what he meant, and the man answered, “Well, you just take a passage from the Bible and explain what it means.” Still replied, “Brother, that is preaching.”

Still and others like him simply follow the pattern for expository preaching that is established by Ezra and his colleagues in Nehemiah 8: godly men reading God’s book and explaining it in such a way that people can understand its implications. Yet this brief story raises an important question: What are the key principles of expository preaching?

Honoring the Text of Scripture

First, expository preaching always begins with the text of Scripture. This does not mean that we must begin every sermon with the phrase “Please turn in your Bible to…” It does mean that even when we begin our sermons tangentially—by reference to a current event or the lyrics of a contemporary song, for example—it is still the text of Scripture that establishes the agenda. The Bible expositor doesn’t start with an idea or with a great illustration and then search for an appropriate passage. No, he begins with Scripture itself, and then he allows the text to establish both the framework and the content of the sermon.

The Bible expositor doesn’t start with an idea or with a great illustration and then search for an appropriate passage. No, he begins with Scripture itself, and then he allows the text to establish both the framework and the content of the sermon.

As John Stott has said, “All true Christian preaching is expository preaching.”1 If we think of expository preaching merely as one preaching style among many, we are on the wrong track. In fact, we have never really preached unless we have gone to a passage of Scripture and unfolded its meaning. Even a topical sermon unpacks a particular text (or texts) of Scripture—for example, James 1 for a sermon on temptation—rather than dancing around the Bible pulling out references here and there just because they relate to your message. If you are preaching topically, then you should still do so in an expository manner.

Now, if we are going to take the Bible to our people in this way, then we must avoid throwing great slabs of religious phraseology at our people like a butcher taking big sides of beef and saying, “Hungry, are you? Give that a bite!” It is the preacher’s task, says Stott, to open what is closed, to make plain what is obscure, to unravel what is knotted, to unfold what is tightly packed.2 We have received this calling that we might do the diligent work of responding to people like the Ethiopian eunuch, who, when asked if he understood what he was reading, said, “How can I, unless someone guides me?” (Acts 8:30–31). Explaining the text is the great privilege of the expository preacher.

While expository preaching begins with the text of Scripture, it is neither simply a running commentary nor a succession of word studies held together by a few illustrations. We should not even think of it as the discovery and declaration of a central doctrine found in a passage. All of these things are important and constituent elements of preaching, but expository preaching does more. Expository preaching seeks to bring the world and wisdom of the Bible to bear on the world in which we presently live.

Expository preaching seeks to bring the world and wisdom of the Bible to bear on the world in which we presently live.

It is possible to preach exegetically—to offer a critical explanation of the text—and yet fail to answer the “So what?” question. When the people called on Ezra to “bring the Book of the Law of Moses that the LORD had commanded Israel” (Neh. 8:1) and he preached, they would never have gone on to build booths on their rooftops (Neh. 8:13–18) if Ezra had not told them that that was the implication of God’s truth in their day and generation.

So, while William Still was correct in asserting that preaching is nothing less than explaining a passage of Scripture, we would do well to make sure our explanations are filled with more than mere information. True exposition must have a prophetic dimension that leaves the listeners in no doubt that what they have just heard is from the living God. It must create in them at least the sneaking suspicion that the Author of the book they are studying knows them. As we faithfully uncover the truth of God’s Word, we expose the listener’s soul to so much more than mortal words.

The preacher’s task in exposition is to declare what the Word says, to explain its meaning, and to establish its implications so that no one will mistake its relevance. Such preaching encourages the listener to understand how, say, a first-century letter to the church in Corinth could ever be relevant to a twenty-first-century congregation living in Cleveland.

Preachers are not able to do that in our own strength, though. We need the Lord’s power, because unless He enables us to show people that the Word of God is the most beneficial, dynamic, boldly attractive material that they could ever encounter, preaching will drive people away to pragmatism and worldliness. And so we need to think clearly, work diligently, fall flat on our faces from time to time, and—by His grace—pick ourselves up and try again until it is clear that God is truly honoring His Word as it comes through us.

This article is adapted from the sermon “The Nature of Expository Preaching” by Alistair Begg.

1 John Stott, Between Two Worlds: The Art of Preaching in the Twentieth Century (Grand Rapids: Eerdmans, 1982), 125.