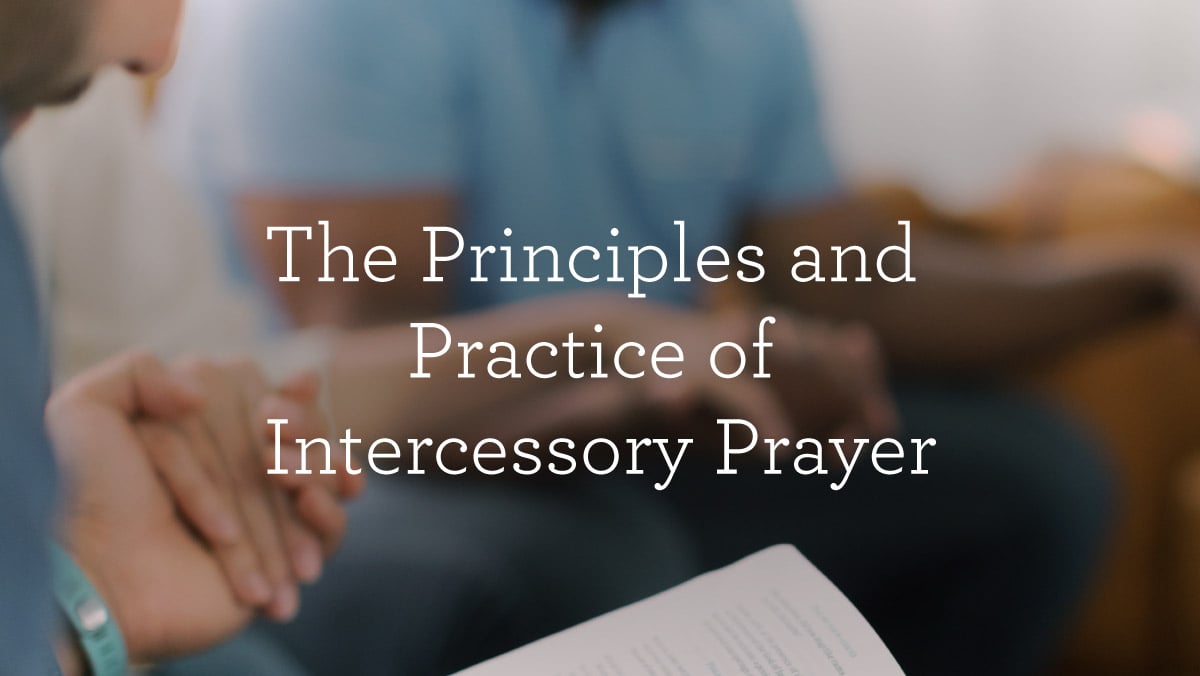 The story is told of a young pastor who, in his first pastorate in Philadelphia, was visited by a group from his congregation. Coming into his home, one of the members told the minister, “You aren’t a strong preacher. In the usual order of things, you will fail here. But a little group of us have decided to meet every Sunday morning to pray for God’s blessing upon you.” In God’s providence, that little Sunday-morning prayer group grew to one thousand people in number. And it was that group and that prayer meeting which underpinned the ministry of J. Wilbur Chapman, one of the great American preachers around the turn of the twentieth century.

The fact of the matter is that each of us owes a great debt—far greater than we might realize—to those who have prayed for us. J. Wilbur Chapman’s experience raises certain questions with which God’s people must reckon. Are we systematically, seriously, and committedly involved in praying for others? Are there people who would notice a change in their lives if we stopped praying for them? Are there preachers or missionaries whose ministries would be less effective if God’s people ceased to pray? In short: Do our prayers affect anybody for God?

When we think of prayer, it’s helpful to distinguish among the different aspects involved. Prayer first involves adoration, the worship of God. Next is confession, the acknowledgment of our sin before God. There’s also petition, which is requesting that God will meet our personal needs. Prayer also often includes thanksgiving, in which the heart expresses joyfulness in God and His provision. And lastly is intercession, the ministry of a soul before God’s throne on another’s behalf. It’s to this type of prayer that we will turn our attention.

Each of us owes a great debt—far greater than we might realize—to those who have prayed for us.

While Abraham modeled varying aspects of prayer throughout his life, his prayer in Genesis 18 serves as an instructive example of intercession. Prior to this prayer, Genesis 13:13 points out that “the men of Sodom were wicked, great sinners against the LORD.” So it’s not a complete surprise that just five chapters later there was such an outcry to God against Sodom and Gomorrah that He determined to exercise His immediate judgment toward them (Gen. 18:16–21). When the Lord shared this plan with Abraham, he made an appeal to God’s nature and character, praying on behalf of the supposed righteous remnant, pleading that the Lord would do what is right (18:23–25). His intercession reveals four principles that we would do well to observe and apply.

1) Intercession Rests upon a Relationship with God

The first principle of intercession is that it rests upon a relationship with God. Abraham is only able to intercede because earlier, he had believed God, and his faith had been credited to him as righteousness (Gen. 15:6). Only when we are declared righteous in God’s sight can we be truly free to effectively pray for others. Abraham’s example invites us, then, to self-reflection: Am I in a right relationship with God? Am I in the position, by God’s grace, to be an intercessor?

We should be careful, though, not to think we can reach that position on our own. It’s solely by divine grace that we are able to exercise this kind of ministry in the first place. God took the initiative with Abraham, choosing him and appointing him for His purposes (Gen. 18:19). Abraham was not searching for God—but God sought him, “that he may command his children … to keep the way of the LORD” (18:19). It was Abraham’s grasp of grace and obedience to God’s will that made him a valuable servant in His hands. Those of us who would be intercessors must pay careful attention to our standing before God. Our lives must be marked by right relationship to our Creator, established on grace and flowing with obedience.

2) Intercession Is Based upon God’s Willingness to Be Approached

Even a right standing before God, however, would amount to little (by way of intercession, that is) if God Himself wasn’t willing to hear us. But thankfully, He is not only willing but eager to welcome us into His presence and listen to our pleas.

Abraham’s experience reminds us that God wants us to approach Him in prayer and will stir us up to do so. In what we may call an internal divine dialogue, God had asked Himself, “Shall I hide from Abraham what I am about to do, seeing that Abraham shall surely become a great and mighty nation, and all the nations of the earth shall be blessed in him?” (Gen. 18:17–18). He then clued Abraham into His plan of judgment on Sodom (18:20–21). He didn’t need to share His plans—but He chose to do so with the aim of stirring Abraham up to intercede on Sodom’s behalf.

That God involves us in His work is an astonishing matter. In some mysterious way, God makes intercessory prayer a necessary wheel in the machinery of His providence. We might imagine intercession as a safety deposit box with two locks: both the box’s owner and the bank must use their keys to open it. In a similar way, God has also chosen to use our prayers in the unfolding of His purposes: heaven holds the key by which decisions governing earthly affairs are made, and we hold the key by which those decisions are implemented. God’s will and our prayers work in tandem. We can be confident, then, that our prayers matter. Indeed, they count for eternity.

So, what about us? Do we share Abraham’s burden for lost people perishing in their sin? Do we take God at His word when it comes to the realities of a future, just judgment (Matt. 25:32–33)? And do these truths spur us on to intercede on their behalf?

In some mysterious way, God makes intercessory prayer a necessary wheel in the machinery of His providence.

In what follows, it appears that Abraham merely haggled with God over numbers (Gen. 18:24–32). But something much more meaningful was taking place. Abraham was not bargaining with God but discovering His willingness to show mercy. He was exploring the extent to which God desired to be approached and to which He desired to respond. Indeed, prayer is not overcoming some reluctance in God, forcing Him to do something that He does not want to do. Prayer is instead implementing God’s decisions. It’s part of seeing His will done “on earth as it is in heaven”

Yet even if we stand in right relationship with God and are welcomed into His presence, it would be a mistake to ask God to intercede in a way that disagreed with His character. Instead, our prayers ought to be made through an appeal to what He has revealed about Himself.

Abraham’s intercession for Sodom highlights several of God’s attributes, beginning with His holiness. God had described Sodom’s sin as “very grave” (Gen. 18:20). Indeed, sin is always a grave matter to God, and He cannot be true to Himself unless He punishes it. Understanding this, Abraham prayed in light of God’s holiness: “I have undertaken to speak to the Lord,” Abraham said, “I who am but dust and ashes” (Gen. 18:27). Until we see God as He truly is, we will never see ourselves as we truly are. Once we see the world through the lens of God’s holiness, however, it will produce in us reverence and godly fear. We will not ask God to bless, prosper, or help anything that is contrary to His holy nature. Instead, His holiness will train us to do His will and pray in accordance with it.

Until we see God as He truly is, we will never see ourselves as we truly are.

Abraham appealed not only to God’s holiness but also to His justice and mercy. God’s justice is His holy will in operation. Abraham asks in verse 25, “Shall not the Judge of all the earth do what is just?” The answer to this rhetorical question is not in doubt: God, the one who “judges justly” (1 Peter 2:23), is committed to righteousness. The Judge will do what is right. And yet He is also merciful. God’s mercy is His love as it encounters specific human sin. In mercy, God pardons people’s transgressions. Because God is holy, just, and merciful, we can intercede with confidence for our unbelieving family members and colleagues, knowing it is His character that spurs us on to prayerfulness.

Finally, though, if we are to make intercession a regular part of our lives, it will take persistence and organization. Notice that Abraham does not stop after his first and least specific question, “Will you indeed sweep away the righteous with the wicked?” (Gen. 18:23), nor does he stop after asking about fifty righteous people, forty-five, forty, and so on. He persists with a logical sequence of questions.

No one—including Abraham, we might safely assume—merely stumbles into a fruitful prayer life. Its cultivation takes time and effort. It’s hard work. Many of us would do well to start small, perhaps setting aside ten or twenty minutes in the day for focused prayer. S. D. Gordon famously remarked, “You can do more than pray, after you have prayed. But you can not do more than pray until you have prayed.”1 In this distinction lies the difference between a rise and a fall among God’s people; it’s the difference between God’s glory and man’s shame.

No one—including Abraham, we might safely assume—merely stumbles into a fruitful prayer life. Its cultivation takes time and effort.

The reasons for prayerlessness abound: busy schedules, other priorities, lack of desire, etc. But the invitation from our Creator to fruitful, effective prayer stands. Armed with the principles of intercession, will we practice it? Will we be found in the school of prayer? It matters more than our sporting events, to-do lists, and even Christian fellowship. When we pray, we fellowship with the eternal God. We get to know Him. And the inverse is also true: no prayer, no divine fellowship. May we then be a people marked by this ministry of intercession.

This article was adapted from the sermon “The Principles and Practice of Intercession” by Alistair Begg.