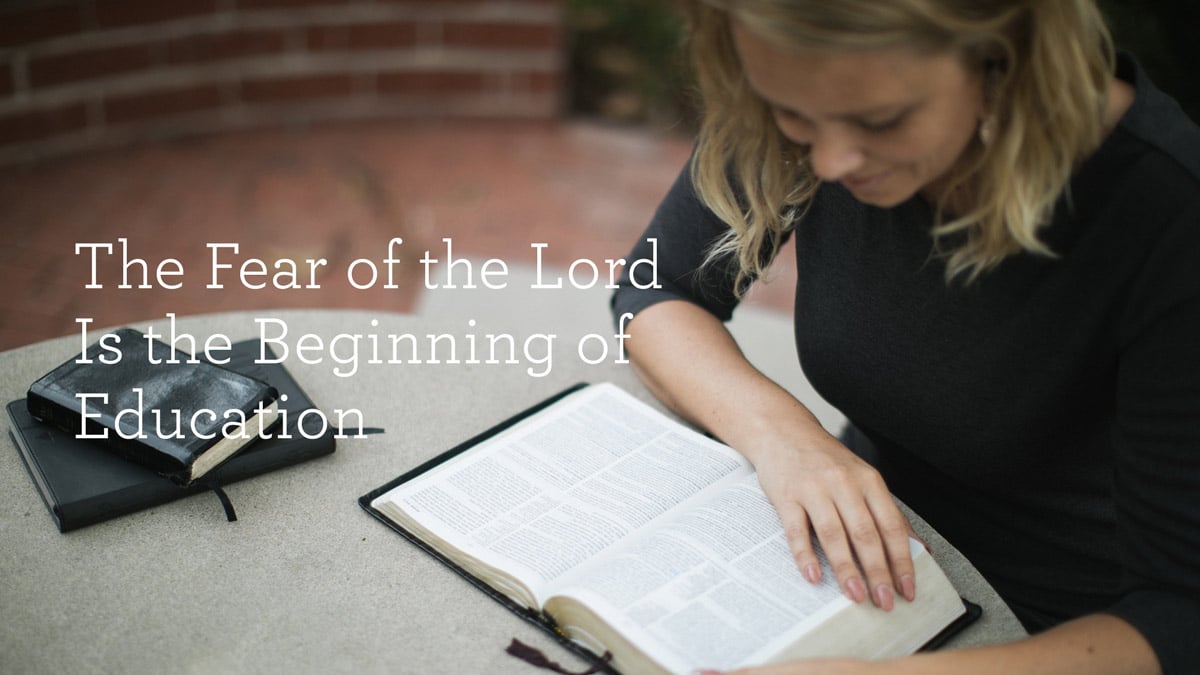 Even in a time of tumult and uncertainty regarding education in our culture, the book of Proverbs remains a timeless course in wise living. It’s self-described purpose is for its readers “to know wisdom and instruction, to understand words of insight, to receive instruction in wise dealing, in righteousness, justice, and equity; to give prudence to the simple, knowledge and discretion to the youth” (Prov. 1:2–4). It teaches us what it means to walk the path God has appointed.

How do we get this wisdom? The Bible’s answer may surprise you. The entire book of Proverbs can be summarized by this one saying: “The fear of the Lord is the beginning of knowledge; fools despise wisdom and instruction” (Prov. 1:7, emphasis added). Wisdom, Scripture says, ultimately comes from God and from a right understanding of Him. And the Bible’s key word for how we’re to understand God is “fear.”

Godly wisdom is not a matter for big brains and Bible studies. It is imminently practical. It’s about how we live our lives every day, about understanding the purpose for which we were made. As people contend over what it means to educate each successive generation, the Christian must remember that there is nothing more fundamental than this: that they fear God.

Elsewhere in the Old Testament, we read the following words from Isaiah, which give us a glimpse of the grounds for a right fear of God:

It is he who sits above the circle of the earth
and its inhabitants are like grasshoppers;
who stretches out the heavens like a curtain,
and spreads them like a tent to dwell in;
who brings princes to nothing,
and makes the rulers of the earth as emptiness. (Isa. 40:22–23)

As Isaiah testifies, God is the creator and sustainer of all that exists. He is immutable in His character and His essence; we can count on Him being consistent and true to Himself. And He is eternal in His existence. If all creation begins with the Lord and is upheld by Him, then He is the one who knows the most about it and how to live in it. For these reasons and more, He is worthy of our reverent fear.

For some, the word “fear” in association with “knowledge” may conjure images of strict teachers with paddles in hand. But the fear of the Lord is not terror at the threat of punishment. The word “fear” as it is used in Proverbs 1:7 could rightfully be paraphrased as one’s love of or trust in the Lord. It is an awe at, respect for, or devotion to the Lord that is not natural but comes from the discovery that God has made us in His image and for Himself. As John Newton memorably put it, “T’was grace that taught my heart to fear.”1 As God reveals His love for us in our sinfulness and rebellion, He brings us to a state of trust, love, and obedience.

C. S. Lewis writes, “In God you come up against something which is in every respect immeasurably superior to yourself.”2 Fearing God means having the humility to merge yourself into His way of doing things rather than making a futile attempt to drag Him along yours. It means accepting that we can begin to do right only by His grace. The fear of God is transformative, impacting not only our minds and the way we think but also our emotions as we respond and our wills as we obey.

Fearing God means having the humility to merge yourself into His way of doing things rather than making a futile attempt to drag Him along yours.

Similarly, when the Bible talks about fools, it’s not referring to IQ or SAT scores. Rather, the fool is the person who sees him or herself as the center of the universe and God on the periphery at best. Paul describes this as a facade of wisdom: “Claiming to be wise, they became fools, and exchanged the glory of the immortal God for images resembling mortal man and birds and animals and creeping things” (Rom. 1:22–23). Fools’ idolatry begins with themselves. Because they have exalted themselves and their understanding, they despise instruction that comes from the Lord—especially when that wisdom reminds them of their own fallenness and God’s preeminence.

The Western democratic world has more opportunities for education than any civilization in human history—but if we look at our world today, we have to admit that we are not more secure or satisfied as a result. We’re a highly educated culture that is still plagued by crime, violence, greed, and fear. We are more informed about civil rights than ever before, yet it’s questionable whether there is any less discrimination in the human heart. Sex education has been a part of most public schools’ curriculum for several decades, but by and large, our culture still misunderstands sex’s purpose and promise.

Education without godly wisdom provides no basis for understanding life, death, and everything else.

Why the significant disconnect? Because education without godly wisdom provides no basis for understanding life, death, and everything else. When the fear of the Lord is not present, then individuals, families, churches, schools, cultures, and nations may know all the facts of life, but they will know nothing about how to live. Neither reading, writing, and arithmetic nor all the diplomas and degrees one can earn can ultimately do good to someone who is walking in rebellion against the Creator.

But godly wisdom provides security. It is “in the fear of the Lord,” we’re told, that “one has strong confidence, and his children will have a refuge” (Prov. 14:26). Our biggest concern, then, ought not be our own or our children’s careers but our conversion and sanctification. God says that when we lie down, when we get up, when we go in the car, when we’re going shopping, and in everything else we may do, we are to teach our young ones (and remind ourselves!) to love the Lord and obey His commandments (Deut. 6:7). This instruction in wisdom is a means of imparting grace into others’ lives and preparing them to live according to their true purposes—as worshippers and friends of God.

Whether your and your family’s journey toward wisdom is just beginning or you have long understood much about God’s ways but desire to learn more, fear of the Lord is how to start and how to continue. On this path, we are counseled in God’s wisdom and grace, ultimately leading us to the embodiment of wisdom—the Lord Jesus Christ Himself. For the fullness of God’s wisdom is finally and savingly communicated to us in the person and work of Jesus. The fear of the Lord Jesus truly is the beginning of all wisdom.

This article is adapted from the sermon “The Beginning of Wisdom” by Alistair Begg.