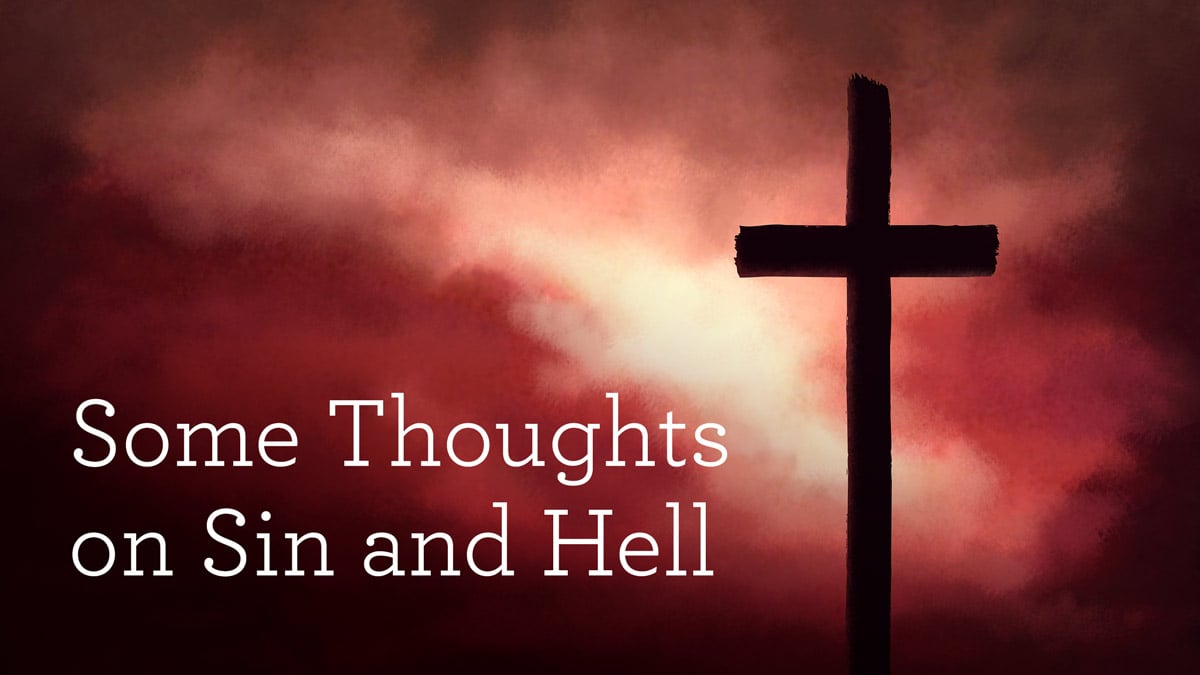 It may surprise some to consider that the strongest words in the Bible concerning hell come from the lips of Jesus Christ Himself. For example, in Mark 9:48, Jesus uses imagery from Isaiah 66 to describe hell as a place full of invincible, flesh-eating worms and unquenchable fire. (That’s not exactly the most pleasant picture, is it?)

The thing for us to bear in mind, however, is that the one who spoke most vividly about eternal punishment is the very same one who died in order that we needn’t experience its pain. The strongest and most striking statements concerning hell come from our Savior, who bore the flames of His Father’s wrath that He might rescue us from the fire of eternal judgment.

The strongest and most striking statements concerning hell come from our Savior, who bore the flames of His Father’s wrath that He might rescue us from the fire of eternal judgment.

Hell Is about God’s Love

Perhaps one of the reasons our culture scoffs at hell and considers the very concept a bizarre relic of the Dark Ages is that unlike Jesus, we often speak of hell so dispassionately. If we believe it, then how can we speak of what the Bible says about the eternal destiny of our unbelieving loved ones with dry eyes? Maybe the memory of Jesus weeping over Jerusalem (Matt. 23:37–39; Luke 19:41–44) is too faint in our minds. Or maybe we forget that God does not desire the death of sinners but prefers that sinners turn from their wickedness and live (2 Pet. 3:9; Ezek. 18:23; 33:11).

In fact, the very existence of hell demonstrates the intensity of God’s love for us. Doesn’t love sometimes fill you with anger? If an acquaintance with whom you spend little time turns his back on you and walks away, you might feel a little pain. But if someone who is a core member of your inner circle does the same and reviles you, it feels exponentially worse. If your spouse walks out and says, “I want nothing to do with you anymore,” wouldn’t you be angry?

The Bible shows us that God expresses His love by eschewing indifference. If a good father really loves his son, he could never be indifferent if that son was abusing drugs. He would be angry beyond description, not because he doesn’t love the boy but because he does love him, with a passion. The father cannot bear to see his child destroy himself. Likewise, a surgical oncologist who loves her patients knows the anger she feels when she realizes there is nothing to be done because the cancer has spread too far.

There is no antithesis between what Jesus says about the reality of hell and what He does Himself by dying on the cross. In His death, He took hell for all who believe.

God’s wrath as expressed in hell is not a fiery outburst. It’s not a cranky emotional explosion. God’s anger signifies His settled opposition to the cancer we call sin, which tears humanity apart from the inside out. Ultimately, there is no antithesis between what Jesus says about the reality of hell and what He does Himself by dying on the cross. In His death, He took hell for all who believe. Not only did He bear our sins, but He endured the wrath we deserve. If you remove the bad news of hell, you gut the good news of heaven.

The Seriousness of Sin

For a supremely holy God, sin is no laughing matter. In Mark 9:42, Jesus tells us just how much He despises sin: “Whoever causes one of these little ones who believe in me to sin, it would be better for him if a great millstone were hung around his neck and he were thrown into the sea.”

Here, Jesus is not necessarily referring to young children only. Rather, if you are responsible for causing any believer to sin, to shipwreck his or her faith, to fall apart in following Jesus, that destruction of God’s loved one deserves a harsh penalty. In the words of R. T. France, “To be the cause of another’s spiritual shipwreck is so serious an offense that a quick drowning would be preferable to the fate it deserves.”1

To toy with sin—to slyly wink or smile at its temptations—is to prove you do not truly know Christ’s saving, sanctifying grace. It is to risk facing the unquenchable fire.

Jesus then warns us about playing fast and loose with our own sin in verses 43–48. An approach to the Christian life that says, “Sin doesn’t really matter, Jesus paid it all, I can do what I like,” is not Christian in any sense. Sin may remain in the believer’s life, but it no longer reigns (Rom. 6:12). The Father’s love for you has set you free from the tyranny of sin. Though perhaps not yet fully destroyed, it has been dethroned. To toy with sin, therefore—to slyly wink or smile at its temptations—is to prove we do not truly know Christ’s saving, sanctifying grace. It is to risk facing the unquenchable fire. Put simply: Sin is serious, and its ultimate consequence, hell, is all too real. You do not want to play with sin.

In Mere Christianity, C. S. Lewis has a wonderful little section where he uses an analogy of God being at work in reconstructing us. He says, “Imagine yourself as a living house. God comes in to rebuild that house. At first, perhaps, you can understand what He is doing.” He is making various basic repairs. “But presently he starts knocking the house about in a way that hurts abominably and does not seem to make any sense.”2

So, you came to trust in Christ, and you knew that you needed a Savior. You were worshipping substitute gods but discovered forgiveness and freedom in Jesus, and you became enamored and delighted with Him. But the longer you went—the more you got help from saints in your church and the more you read your Bible—the more you realized, “I’m flawed, I’m a failure, and I’m weak.”

What is God doing as He reveals our flaws and failures to us? Lewis tell us: “You thought you were being made into a decent little cottage: but He is building a palace. He intends to come and live in it Himself.”3

Every seemingly bitter blow that falls from God’s hand comes from a Father who wants to guard His little ones from the fangs of sin.

Sometimes, like a good surgeon, God opens our eyes to cancerous sin that has taken root in part of our lives. And God, by His Spirit—and we, in the power of His Spirit—must do whatever it takes to cut it away, lest it spread beyond control and kill us.

Your Father in heaven never intends to harm you. This is the God who sacrificed His only Son to block you from the wide gate that leads to destruction. Every seemingly bitter blow that falls from His hand comes from a Father who wants to guard His little ones from the fangs of sin. He does not desire that you languish in sin and hurt, and He certainly does not desire for you to spend eternity apart from Him. His good pleasure is not in punishment. Instead, for any who would believe, “it is your Father’s good pleasure to give you the kingdom” (Luke 12:32).

This article was adapted from the sermon “Sin Is Serious, Hell Is Real” by Alistair Begg.