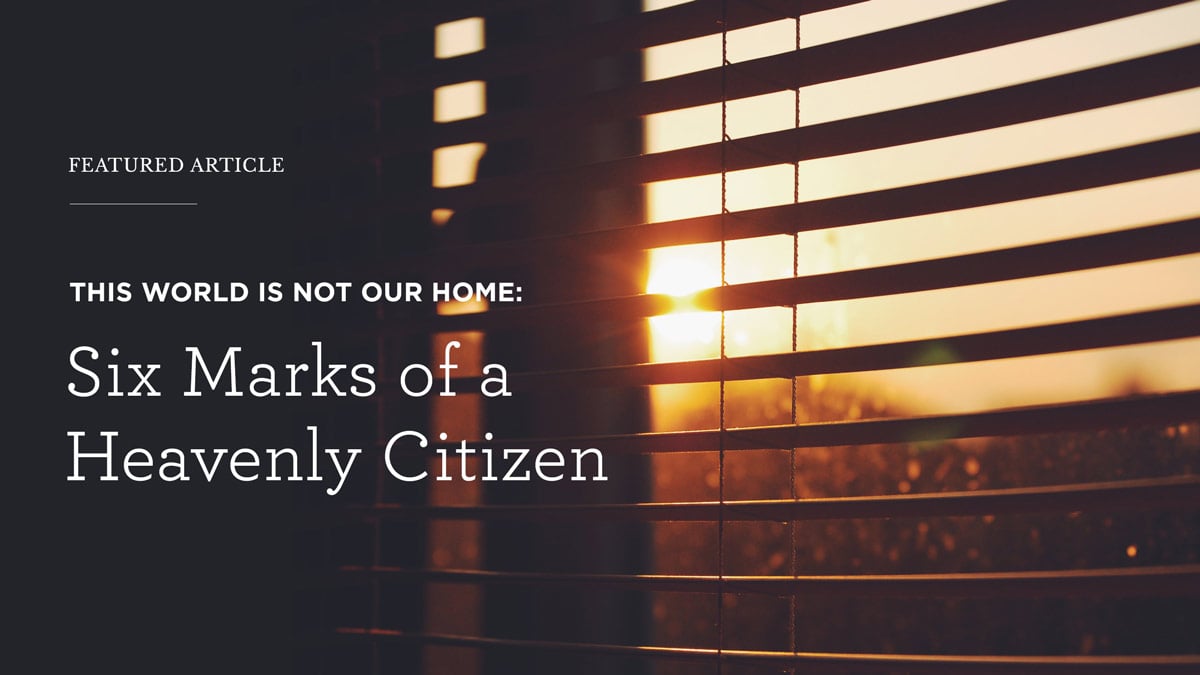 In Philippians 3:20, Paul lays down a principle that has been a great hope for each ensuing generation of believers: “Our citizenship is in heaven, and from it we await a Savior, the Lord Jesus Christ.” Peter puts this concept another way in his first letter, calling the Christians to whom he writes “sojourners and exiles” in their own country (1 Peter 2:11).

To be a Christian is to be a citizen of heaven, and to be a citizen of heaven is to be a stranger and exile while on earth. This status is not only in name; it actually results in a true break with the world, so that Christians no longer do as the world does, and the world often resents them for it (1 Peter 4:3–4). In the words of Hebrews 11:16, “They desire a better country, that is, a heavenly one.” Christians are to be recognizable by their strangeness in this world, because Christians are resident aliens here.

In 1 Peter 1:17–25, the apostle identifies six characteristics that mark this kind of earthly exile. And in them is an implicit test: Are we ourselves really “resident aliens”?

The notion of reverent fear is difficult to grasp in a culture that treats fear as harmful and shows reverence to little. Yet Peter writes in verse 17 that believers are to approach God the Father with fear: “If you call on him as Father who judges impartially according to each one’s deeds, conduct yourselves with fear throughout the time of your exile.”

In mentioning fear, Peter does not mean the kind of fear that drives us from God. Rather, it is a fear by which we are drawn to Him. The story is told of a boy out with his friends. They were up to no good, and when the boy resisted the pressure of his friends to participate, they said, “You’re no fun! You’re a coward! You’re just afraid that if you join us, your father will hurt you.” But the boy said, “No, I’m not. I’m afraid that if I do this, I will hurt my father.”

The wonder of being in Christ is that the judge of all the earth, the one who created the universe out of nothing, is the one whom we can now approach and address as our Father. God is unlike earthly fathers, who, no matter how fair they try to be, can be arbitrary. He “judges impartially according to each one’s deeds.” He is worthy of respect—and so resident aliens dread that His frown would be on their lives and instead long to live under the sunshine of His smile.

The message of Christianity is neither that we must pull ourselves up by our spiritual bootstraps nor that we should sit cross-legged on the floor and try to think of something transcendental. It is that you can do nothing to save yourself from sin and death—but someone else can. Indeed, He has. The believer therefore is to have the same attitude that John Newton expressed near the end of his life: “My memory is nearly gone. But I remember two things: that I am a great sinner, and that Christ—is a great Saviour!1

Peter writes in verse 18, “You were ransomed from the futile ways you inherited from your forefathers.” In our natural state, what has been handed down to us is an empty way of life. We may receive convention, religion, and worldly wisdom, but it is all ultimately empty. And unless somebody comes to fill that emptiness, then we will try to fill it with all kinds of things that will not do the job. As mathematician, philosopher, and theologian Blaise Pascal wrote, “The infinite abyss can only be filled by an infinite and immutable object, that is to say, only by God Himself.”2

What’s more, this is accomplished not by “perishable things such as silver or gold, but with the precious blood of Christ” (vv. 18–19). Indeed, Peter repeats the idea in verse 23: “You have been born again, not of perishable seed but of imperishable, through the living and abiding word of God.” Christians aren’t redeemed by something; they are redeemed by someone. Instead of turning His back on us, God pursued us in Christ, redeemed us from our old way of life by His blood, and brought us into a new life by His Spirit. The resident alien understands this and says, “Hallelujah!”

When Peter calls his readers “believers in God” in verse 21, he means more than that they believe God exists, for “even the demons believe” (James 2:19). Rather, he says, “Your faith and hope are in God.” The author of Hebrews similarly says that the kind of faith that draws near to God is to believe not only “that he exists” but also “that he rewards those who seek him” (11:6).

Those who are in Christ thus draw near to God in trust. What Peter describes is an act of approach, a commitment. He might have said that we are to “believe into God.” That is to say, we should be all wrapped up with God. As we abandon the futile way of thinking that marked us before, we cultivate a trust and satisfaction in the fullness and wonder of Jesus. We live in faith and in hope.

Moreover, this faith and hope are in God—not just a god but “the God and Father of our Lord Jesus Christ” (1 Peter 1:3). Our trust is not in human tradition, idolatrous worship, or empty illusion. It is not built on a foundation of sand (Matt. 7:24–27). It is trust in God, who is really there and who keeps His promises. Even as resident aliens suffer in exile, they do so knowing that Jesus Christ, who died for them, suffered first and received the reward of His suffering. They know securely, in the words of Paul, that “hope does not put us to shame, because God’s love has been poured into our hearts through the Holy Spirit who has been given to us” (Rom. 5:5).

While pilgrims in this world, believers also obey the truth. Peter affirms in verse 22 that his readers have “purified [their] souls by [their] obedience to the truth”—namely, the truth of the Gospel. Having feared God, having understood the redemption that He alone offers, and having believed that He keeps His promises, they have done something about it. Not only have they heard the truth of God; they have also heeded it, embracing Jesus Christ in response to the Gospel.

Peter’s use of the perfect tense signals that what he has in mind is a decisive act in the past that has abiding consequences. When people are married, for instance, they make a decision in a moment that affects the rest of their lives. That moment may be months or years in the making, but it is nevertheless decisive. And like the man who sold all he had to buy a pearl of great price (Matt. 13:45–46), like the disciples who left their nets, their boats, and their father to follow Jesus (Matt. 4:18–22; Mark 1:16–20; Luke 5:1–11), the resident alien has experienced God’s calling and entered decisively and willfully into a relationship with Jesus Christ—“no turning back, no turning back.”3

God’s people in this world also love one another. The work of God gives us love to share, and it gives us a whole new family to share it with. Therefore, in verse 21, Peter urges his readers, “Love one another earnestly from a pure heart.”

Earnest love is a deep-rooted loyalty that recognizes that you’re not perfect, and neither is the person you’re trying to love.

Those who love “earnestly” don’t merely pretend to love. They don’t play at love. They’re not wordy or sentimental. Earnest love is a deep-rooted loyalty that recognizes that you’re not perfect, and neither is the person you’re trying to love. It weathers the storms, overcomes disappointments, and bears others’ burdens (Gal. 6:2; 1 Cor. 13:4–7). In other words, the kind of love that citizens of Christ’s kingdom show is the kind that He modeled on the cross (1 John 4:19).

This Christian love is not a result of emotional surges. Instead, it is rooted in the truth of the Gospel, grounded in the living and enduring Word of God, and results from our obedience to that Word’s truth. It finds its source in the redemption of Jesus Christ and the regeneration of the Holy Spirit, which set us free from the old way of doing things. What deals with disappointments? What heals our hurts? What clears away anger, malice, spite, envy, and slander? Only the love that comes through the resident alien’s Spirit-filled obedience to the truth of God’s Word.

Finally, though we may be temporary citizens of earthly cities, states, and nations, Christians are to put our ultimate hope in our heavenly citizenship, because we recognize that “the world is passing away, along with its desires” (1 John 2:17). Or, as Peter says in verses 24–25, quoting Isaiah 40:6–8,

All flesh is like grass
and all its glory like the flower of grass.
The grass withers,
and the flower falls,
but the word of the Lord remains forever.

“And this word,” he adds, “is the good news that was preached to you.”

The only way to make a real mark is to make one for God.

You may have great dreams for your life. You may even achieve them! You may go down in history. They may remember your name for decades and centuries to come. But in the light of eternity, it’s a drop, a moment, a breath. The only way to make a real mark is to make one for God. The only sure place for a resident alien to find confidence is not in the transience of our lives but in the eternity of the Gospel of Jesus Christ. For “whoever does the will of God abides forever” (1 John 2:17).

While Christians have their citizenship in heaven, we have no heavenly passport to show at the airport when we travel abroad. Our credentials are of a different kind. They are written on our lives. If we claim to be heavenly citizens, then the world has a right to ask us for our credentials—to see the difference that our lives display. And if they find in us reverent fear, humble dependence, active trust, decided obedience, earnest love, and eyes for eternity, then they have reason to trust our claim. By God’s grace, they, too, will realize that this world is not our home.

This article is adapted from the sermon “Resident Aliens” by Alistair Begg.