“Blessed be the name of God forever and ever, to whom belong wisdom and might. He changes times and seasons; he removes kings and sets up kings…” (Daniel 2:20-21)

Having just recently concluded a teaching series on Daniel, these words are helping us as a congregation to maintain our equilibrium in the current political chaos. 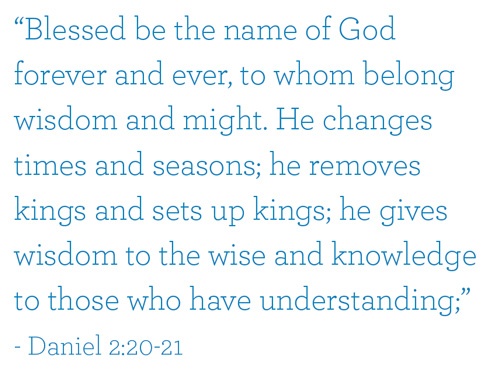 Last month, Susan and I attended a Republican presidential debate. The moderator had his hands full attempting to maintain some semblance of order as the five presidential hopefuls re-enacted a playground brawl. In the audience, George H. Bush, a humble, well-respected president, provided a striking contrast to the arrogant bluster of the frontrunner, Donald Trump. The newspapers subsequently predicted the battle ahead between Hillary and Donald.

If ever there was a time to pray for the overruling hand of providence to save us from ourselves, it is surely now. It is both a privilege and a responsibility to engage in the process afforded us to vote. Our citizenship as believers is ultimately in heaven but presently on earth. Jesus did not ask His Father to remove his followers from the world, but to keep them from the evil one. So we take our place in the world of commerce and sport and medicine and art and politics. Our view of the world is framed by essential, basic truths: God is the Creator and Sustainer of everyone and everything; He established family life as one man and one woman in a heterosexual, monogamous relationship; He established the sanctity of life and calls for us to “rescue those who are being taken away to death” (Proverbs 24:11).

God scatters the proud in the thoughts of their hearts and also brings down the mighty from their thrones.

As you think of voting, consider character, features like humility, integrity, purity, and did I mention humility?

I have grown to love my adopted homeland and, like you, I care deeply about these matters but with you I affirm that providence is a soft pillow and we may lie down in safety knowing that God is in control.

Thank you for being such a vital part of helping us to stay on the Gospel in these uncertain times.