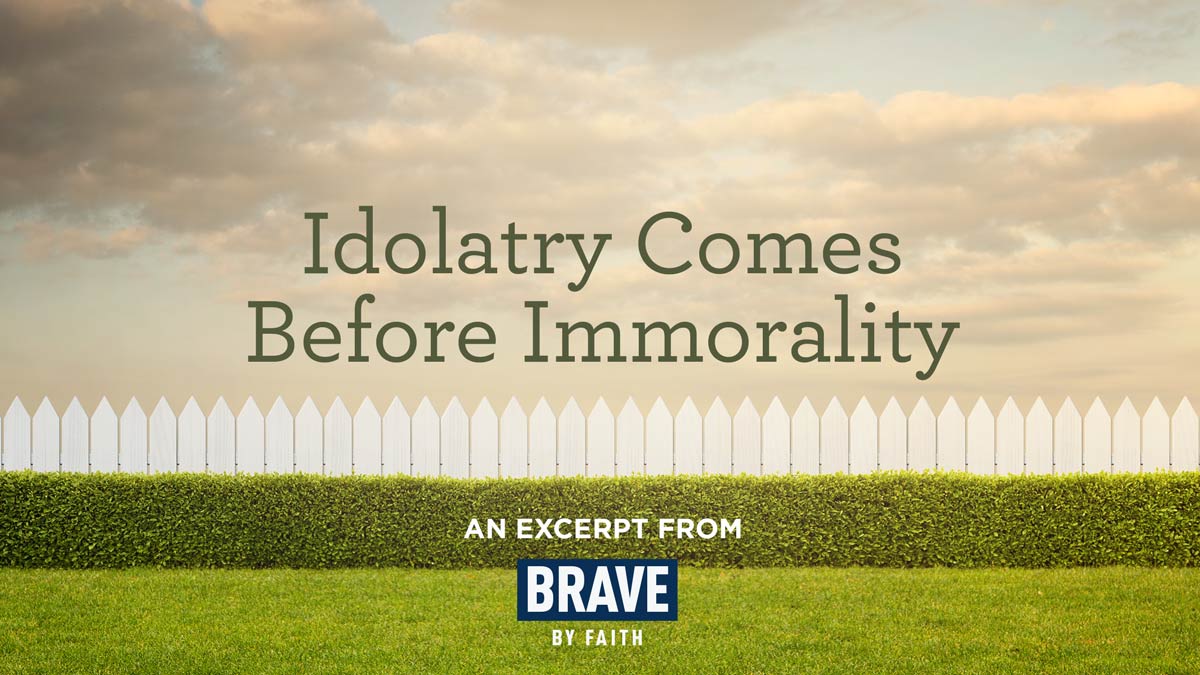 King Nebuchadnezzar sets up a statue of himself and says, in essence, “I have had this amazing image put up, and I want universal submission and worship, from everyone, or else.”

Unsurprisingly, everyone says, “Ok—we will bow.” Perhaps for most of them the sight of this magnificent image was sufficient to cause them to bow. Perhaps for some of them, the sight of everyone else bowing made it clear that it was the right thing to do. And for the rest of them, the thought of the furnace was more than enough to get their knees to bend: “As soon as all the peoples heard the sound of the horn, pipe, lyre, trigon, harp, bagpipe, and every kind of music, all the peoples, nations, and languages fell down and worshiped the golden image that King Nebuchadnezzar had set up” (Daniel 3:7).

All of Us Still Worship

What is going on here? It’s simple: idolatry—worshiping something that a human has made instead of the God who made humans. The people who gathered on that plain were bowing to an image as though it were God. Whether it was because they were impressed by what they saw, or because they wanted to fit in with everyone else, or because of the threat of what would happen if they did not, they chose to bow to the image, and so they made it an idol.

Idolatry is not only a problem of ancient civilizations. It is a problem of all human societies because it is a problem of human hearts. Romans 1 is speaking of everyone when it says that “although they knew God [deep down], they did not honor him as God or give thanks to him …. Claiming to be wise, they became fools, and exchanged the glory of the immortal God for images resembling mortal man .... [They] worshiped and served the creature rather than the Creator” (Romans 1:21–23, 25). As a result of that idolatry, “God gave them up in the lusts of their hearts to impurity, to the dishonoring of their bodies among themselves” (Romans 1:24).

Idols Change, Our Reasons for Bowing to Them Do Not

Idolatry—in your life and more broadly in society—precedes immorality. If we would understand why immorality is tolerated or even promoted, we need to look behind the behavior to the worship—to the idol.

Of course, the idols change; few people in the West bow down to golden images today. But the idols have no less a hold, and our reasons for bowing to them are no different—they look impressive, our peers are worshiping them, and our society threatens us with penalties if we do not join in. As Paul Simon put it in “The Sound of Silence,” “The people bowed and prayed / to the neon god they made.” Great swaths of humanity bow down at various shrines—temples, malls, offices, strip bars—with great sincerity of heart, and every one represents a false religion.

It is far easier to identify the idols in other cultures than in our own. There are idols we bow down to not because we’re made to but because we want to, and those are the very hardest to acknowledge.

To take two examples: first, the average Western Christian parent finds it natural to worship the idol of children, at the expense of fidelity to God and service of his people. Of course kids are a good thing—idols usually are—but they so easily and unnoticeably become a god. It becomes so vitally important that Tommy goes swimming and Zadie has skating and Rochelle does her tutoring, and maybe they won’t have time to go to the church youth group, and maybe we won’t have time as a family to read the Bible together each day. The word of God and the people of God are important, but the greatest commitment is to the kids. When push comes to shove, we worship the image of the perfect family, and the holy God can fit in around that.

Second, the average American Christian finds it natural to worship the idol of politics. We think and pray and speak as though if our guy wins, the kingdom wins; and if he loses, then it’s hell. In other words, we treat our favorite for president, or our political party, as a god.

American Christians are used to having a political home, and we have forgotten that this is Babylon—it may be Republican Babylon or Democrat Babylon, right-wing Babylon or left-wing Babylon, but it is Babylon nonetheless—and we have forgotten that the kingdom of God is not of this world. My sense is that in the US most of us worship capitalism, and none of us have any idea of what socialism actually is. Neither builds the kingdom of God; as the economist John Kenneth Galbraith once memorably put it, “Under capitalism, man exploits man; while under socialism just the reverse is true.”

Set up a political party or economic system as an idol and you’ll make sacrifices to it. Witness the ethical backflips that Christians on both sides of the divide (sadly, it’s more of a chasm) have started to perform to defend the biblically indefensible. There is no nuance and no ability to see the strengths and weaknesses of either our own position or of others. It’s idolatry—confidence in something other than God to deliver what we need.

So we bow down to the idol of party, and we attend our chosen network temples of Fox News or CNN and MSNBC. We don’t think—we just rearrange our prejudices. One way to discover if you are bowing down is to ask yourself this: Do you watch, and seriously consider, the views of the networks that embrace the other view to yours? If not, then when push comes to shove we are worshiping the image of president and party, and the holy God can fit in around that.

The list could go on: status, acquisition, our bodies… These are the things that our culture worships, and so these are the gods to which we bow without thinking.

Our hearts naturally worship idols that exalt our agenda, our goals, our significance, or our reputation. Christian faith does not mean that we are immune to idolatry; but it does mean that we have no excuse not to dismantle our idols. A Christian is not someone who does not struggle with idol-worship, but he or she is someone who prays:

“The dearest idol I have known,
Whate’er that idol be,
Help me to tear it from its throne
And worship only thee.”
—William Cowper, 1731–1800