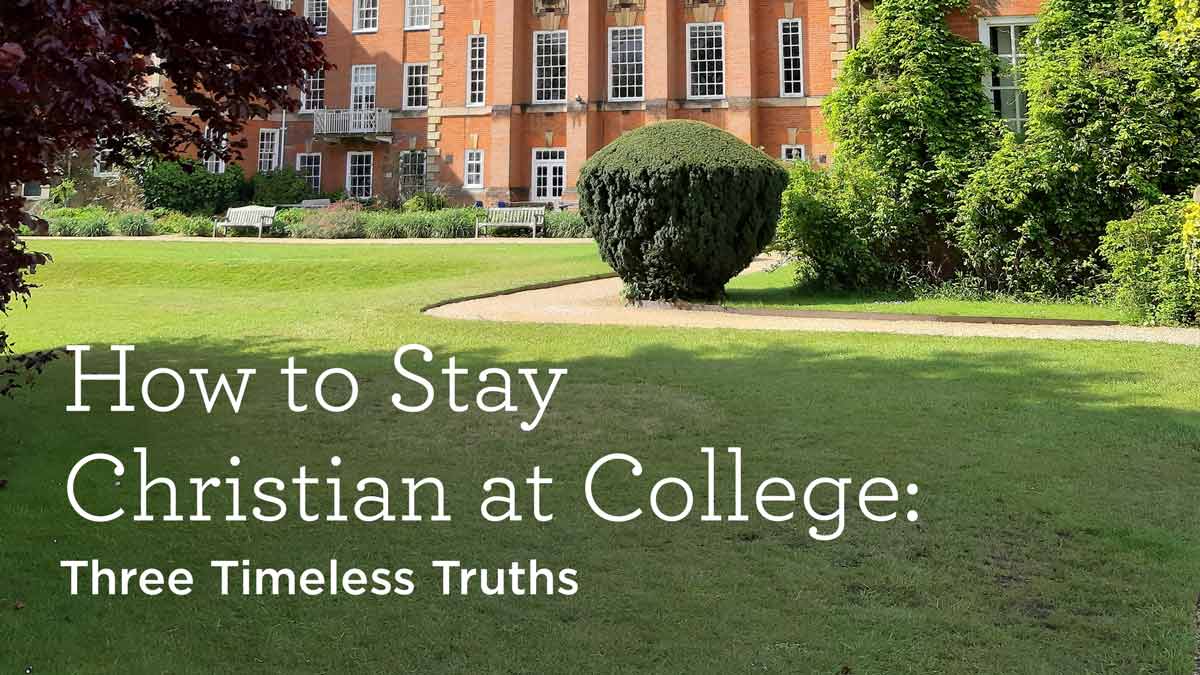 It has never been easy to be a college student. You face pressure from every side to answer the perennial question: So, what are you going to do with the rest of your life? That’s not to mention the social stressors of figuring out where you belong, and perhaps of being away from home for the first time. Your years at university can be thrilling, yes, but they can also be daunting.

In addition to all the challenges of self-discovery and finding your footing in God’s world, for many, college comes with threats to the core principle of education itself. No longer is the free exchange of ideas and unhindered dialogue universally accepted; rather, students are often expected to walk carefully along lines of tolerance and agreement. As Michael Kruger points out, ours is an era in which “disagreement is the same as disrespect in most people’s eyes.”

So what is a Christian college student to do—especially at a secular institution?

For one, you can and should develop some acquaintance with apologetics. Certainly you don’t have to become an expert (it’s okay to admit you don’t know something!), but it will prove very useful to at least know what you will be up against as you step foot in the lecture hall. And the Christian faith has the wherewithal, the rigorous internal logic, to stand up to its most strident critics. It has not only lasted these last two thousand years, but it has flourished the world over. Don’t you think it can withstand a few knocks from a professor—or even your deepest doubts? To better understand the rationality and groundedness of the Christian faith, Kruger’s new book, Surviving Religion 101, is an excellent tool.

Beyond that, you can and should go further up and into the core truths of the Christian faith. As Kruger writes, “Good theology matters. A believer with a solid theological foundation is able to handle these difficult questions better than a person who has a shallow understanding of the Christian faith.” With that in mind, here are three simple yet profound reminders.

You Are Not in the Grip of Blind Forces

Psalm 31:14–15 says, “I trust in you, O LORD; I say, ‘You are my God.’ My times are in your hand.” What an excellent little prayer for college students! More than likely, as you venture into the world of higher education, you will be surrounded by people who have convinced themselves of the power of random chance and impersonal forces rather than any conception of God. Perhaps some believe that “God” is actually within each of us or that “God” is actually nature itself.

God holds everything—your worries and your fears, all your years at college and beyond—in His hands.

But as a Christian, you know that God holds everything—your worries and your fears, all your years at college and beyond—in His hands. There is no beauty, no meaning, no hope in blind, deterministic forces. But if your times are kept secure in the steadfastly kind hands of the Lord, then you have cause for great hope, no matter your circumstances.

You may not be able to answer every accusation from the naturalist or the relativist—and that’s okay. They didn’t come to their conclusions on the spot, and neither do you have to. You have time to consult good Christian sources and to inquire in your community of faith. But in all that process, remember that all your times are in your sovereign Lord’s hands.

You Are Not Tossed About on the Sea of Chance

In his novel Nausea, Jean-Paul Sartre describes his character Roquentin walking in the city park and being overcome by nausea brought on by the perceived meaninglessness of life. As he looks around, he concludes, “Every existing thing is born without reason, prolongs itself out of weakness and dies by chance.”1

That would make for a nice T-shirt, wouldn’t it? But you can see the absurdity of such a sentiment. To embrace such a statement is to embrace nihilism. And unfortunately, that’s the final destination for much of the secular academy’s thinking, which struggles to find a glimpse of a reason to explain what is true, good, or beautiful. Any such categories descend into meaninglessness.

But as a Christian, you know that such absurdity does not reflect God’s world as it actually is. With the psalmist, you can say to God, “You are my rock and my fortress; and for your name’s sake you lead me and guide me” (Ps. 31:3). Your life is not sinking in a sea of random chaos. Your times are safe and secure in the hands of the one who made you and now leads you on.

You Are Training in the Academy of God’s Providence

When those around you are smitten with existentialism, taken in by nihilism, or perhaps given over to hedonism, you as a believer must embrace the truth that God has not abandoned the world that He has made. Perhaps more poignantly, He has not abandoned you. Rather, He is working within His creation—including in you, in this moment—to manage everything according to His plan.

In this vein, Romans 8:28 is another important text for college students: “We know that for those who love God all things work together for good, for those who are called according to his purpose.” That’s all things. Your bloated syllabi? Yes. The lecture with obvious contempt for Christianity and all things associated with it? You bet. Your doubts? Yes, even these. If God holds your times in His hands, then any challenge you experience is no surprise to Him—not in the slightest.

When you encounter the world’s antagonism toward and contempt for the truth of the Gospel—in educational settings or otherwise—you’ll likely feel that you are being “tossed to and fro by the waves” (Eph. 4:14). Be encouraged that the God whom even the winds and waves obey (Matt. 8:27; Mark 4:41; Luke 8:25) is also sovereign over your life. Whatever the world may throw at you, be persistent “to grow up in every way into him who is the head, into Christ” (Eph. 4:15). There is no greater aim for God’s people.

Portions of this article were adapted from the sermon “‘My Times Are in Your Hand’ — Part One” by Alistair Begg.