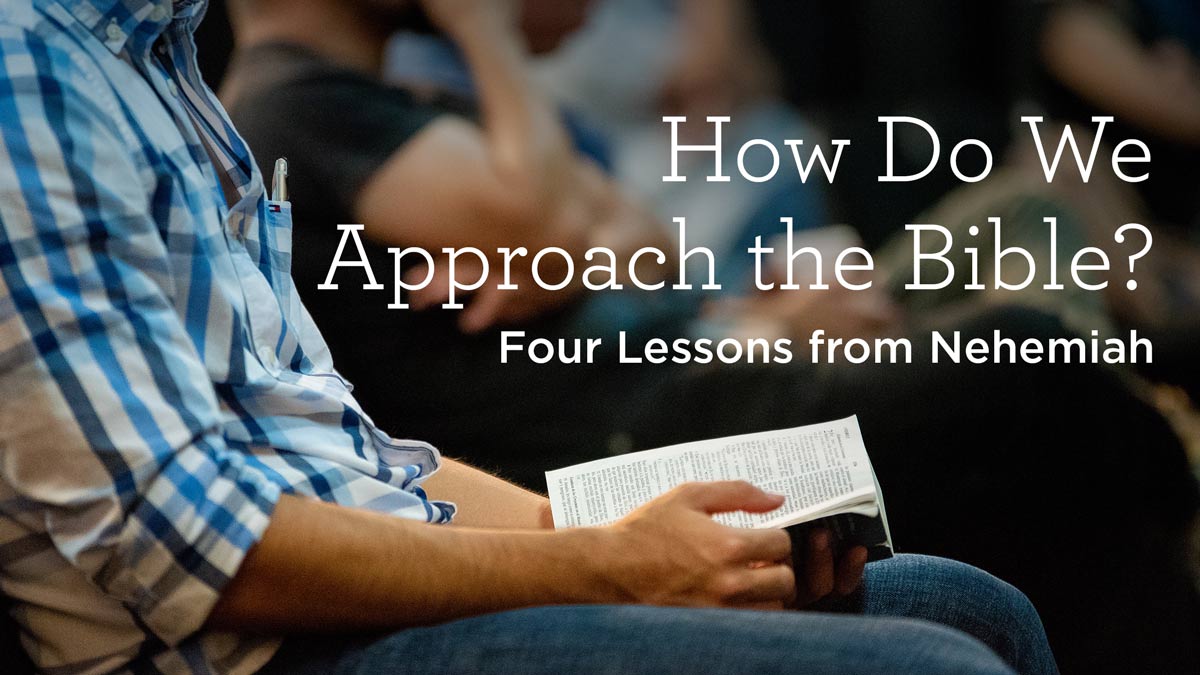 God’s Word is a focal point during most Christian worship services. But why do so many churches give such priority to the public reading and preaching of the Bible? And how should the church respond?

These are fair questions—and there’s no better place to find the answers than in the Bible itself. The Bible is, after all, the final authority on the nature of all Christian doctrine. So while it may seem circular to look to Scripture to see whether our use of Scripture is indeed biblical, the truth is that there’s no better way to weed out the influence of preference or culture and get right to the heart of how we should approach God’s Word.

The New Testament has plenty to say about God’s Word and its central place when God’s people gather—e.g., Paul’s exhortations to preach it (2 Tim. 4:2) and publicly read it (1 Tim. 4:13). But we can turn to an even more ancient example, Nehemiah 8, to see four ways God’s people should approach His Word.

Nehemiah 8 begins with a description of the people of Israel congregating to hear the Scriptures taught:

All the people gathered as one man into the square before the Water Gate. And they told Ezra the scribe to bring the Book of the Law of Moses that the LORD had commanded Israel. (Neh. 8:1)

From chapter 7 of Nehemiah, we can infer that there must have been around fifty thousand people gathered on this occasion. That’s a large congregation! And yet we’re told that they gathered “as one man.” In other words, they came together in a spirit of unity, with the same desires and devotion.

We see in Nehemiah 8:1 that the people found fellowship in their common desire for God’s Word. You can imagine them saying, We want to hear what God has to say, what the Lord has commanded. We don’t want to hear too much from you, Ezra—but we want to hear a lot from God! Just read the Book to us, explain the Book to us, apply the Book for us, and we’ll be very thankful for that.

A church will never have a spirit of unity and commitment without shared devotion and desires. Paul calls for this kind of unity in 1 Corinthians 1:10: “I appeal to you, brothers, by the name of our Lord Jesus Christ, that all of you agree, and that there be no divisions among you, but that you be united in the same mind and the same judgment.” While fellow believers may not agree about everything, being a member of God’s family involves a common commitment to the priority of prayer, the authority of the Bible, the centrality and preeminence of Jesus, the absolute necessity of evangelism, and the importance of the worship.

After the people gathered and called for the Scriptures, Ezra began to read aloud:

So Ezra the priest brought the Law before the assembly, both men and women and all who could understand what they heard, on the first day of the seventh month. And he read from it facing the square before the Water Gate from early morning until midday, in the presence of the men and the women and those who could understand. And the ears of all the people were attentive to the Book of the Law. (Neh. 8:2–3)

For biblical preaching to take place, both the congregation and the preacher must come prayerfully attentive to God. If the preacher speaks merely to hear his voice or to impress people, or if congregants listen solely to be entertained, there will be neither real proclamation nor meaningful reaction.

In Nehemiah 8, we can surmise that Ezra or another elder would get up and read a section of Scripture; then the Levites, who were scattered throughout the group, would turn to the people near them and say, “Do you understand what he just read?” And if the people said, “No, I don’t,” or “I have a question about this,” then the Levites read again from the Law of God and “gave the sense” so that the individuals could understand it and apply it to their lives (Neh. 8:7–8).

A church will never have a spirit of unity and commitment without shared devotion and desires.

Here we see an important principle for our churches: no individual who has the privilege of proclaiming the Word of God can possibly answer all the questions that stem from it, neither by ability nor by time or attention. But if you have a plurality of elders in a church who are “able to teach” (2 Tim. 2:24), then the questions raised by the congregation may be answered by these men as they serve among the people. The work of eldering, in other words, involves ensuring that your congregation’s members are growing in their understanding and personal application of God’s Word.

Of course, the Levites’ help would have been of little value if the people had not listened for themselves. As verse 3 points out to us, “The ears of all the people were attentive to the Book of the Law,” and verse 5 shows us that the whole assembly stood as Ezra opened God’s Word to them. The congregation was not filled with a bunch of spectators. No, they were engaged actively and attentively.

As Ezra’s teaching concludes, we see evidence of the congregation’s active participation in their response:

Ezra blessed the LORD, the great God, and all the people answered, “Amen, Amen,” lifting up their hands. And they bowed their heads and worshiped the LORD with their faces to the ground. (Neh. 8:6)

Not only did the people listen attentively, but they also responded properly to the reading and preaching of God’s Word. They lifted their hands in worship, they bowed their faces in contrition, and, as verse 9 informs us, they “wept.”

Why did they weep? Because the Word of God struck them! The Book of the Law hit them where they needed to be hit, and so they mourned and shed tears. You see, not all guilt is wrong. The Spirit produces good guilt when God moves in our hearts and seemingly says to us, You haven’t been praying the way you ought, You haven’t been living the way you ought, or Nobody around you has ever heard one thing about Jesus from your lips.

As we listen to the Lord and take His instruction to heart, He will reignite the flame of joy, even from smoldering embers.

Yet the good news is that when God hits you with His Word like that and your face is bowed down, He never wants to leave you mourning. The Spirit shows us our need of a Savior, repentance, and faith, and He nudges us back up to praying, living, and witnessing again as we ought. As we listen to the Lord and take His instruction to heart, He will reignite the flame of joy, even from smoldering embers.

As he saw the congregation’s reaction, Ezra offered them words of comfort:

“Do not be grieved, for the joy of the LORD is your strength.” … And all the people went their way to eat and drink and to send portions and to make great rejoicing, because they had understood the words that were declared to them. (Neh. 8:10, 12)

We must not miss the causal link between God’s Word and our joyous response. Verse 12 shows us that the people left in a state of delight “because they had understood the words that were declared to them.” They had gathered expectantly, listened attentively, responded properly, and now they were able to depart joyfully—all because God had spoken and they had listened.

You see, the Lord delights to bless His people—and a significant means He uses to do so is His Word, recorded for us in Scripture. If our churches want to know the joy of the Lord as our strength, then we have no more fruitful practice than to assemble around the Bible. And as we gather, let it be our earnest cry to God that we may hear His voice and depart in joy, knowing that we have met with Him who speaks through every page of Scripture.

This article is adapted from the sermon “Bring Out the Book!” by Alistair Begg.