Freedom in Christ is one of the great benefits of knowing God. Many Christians rightly value this wonderful gift. It’s common, however, for people to tout this freedom as a rationale for doing what they want when they want with whomever they want. Believers with a mistaken notion of Christian freedom may watch things they shouldn’t watch, can be influenced by people they shouldn’t imitate, and can say things they shouldn’t say, all the while forgoing biblical instruction and Christian fellowship. In the words of Peter, they are “using … freedom as a cover-up for evil” (1 Peter 2:16).

This great confusion about the nature of Christian freedom is one of the most widespread and pernicious errors in the modern church. And the reason so many fall into this error is that freedom in Christ, as the Bible defines it, is not simply liberation from outside demands; it is liberation from sin, in order that we might in turn become “slaves of righteousness” (Rom. 6:18). It is vital that we understand this wonderful paradox of our freedom in Christ.

In his letter to the church in Rome, Paul uses an image from the institution of slavery in Roman culture to address this paradox of Christian freedom: “Do you not know that if you present yourselves to anyone as obedient slaves, you are slaves to the one whom you obey …?” (Rom. 6:16). Here, he introduces us to a principle that it is difficult for many modern people to grasp: Christian freedom is not complete autonomy; it is a choice of mastery. We belong to the power we obey.

Paul describes two powers to which we might be enslaved: sin and obedience. These powers are opposed to one another, not as friendly competitors but as violent antagonists (Gal. 5:17). When temptation comes, on whatever basis, it’s not a game. We are fooling ourselves if we think that it doesn’t really matter if we obey sin in one instance and obey God in another. It matters radically! If we obey the temptation to lie, we become slaves to lies. If we obey the temptation to make choices that lead to addiction, we become enslaved to addiction. And so it goes: the power we obey is our way of life.

Christian freedom is not complete autonomy; it is a choice of mastery. We belong to the power we obey.

But praise God that through Christ’s redemptive work, we have been set free! By the power of the Spirit within our lives, we may do what is right.

Before knowing Christ, when we invested our bodies, minds, and spirits in the service of sin, we received an appropriate return on our investment. J. B. Phillips’s paraphrase of Romans 6:21 captures this principle wonderfully: “When you were employed by sin … what sort of harvest did you reap from those things that today you blush to remember? In the long run those things mean one thing only—death.” “Freedom from sin” is not some sort of euphemism for a restrictive and prudish lifestyle. It means freedom from a pursuit that is profitless, shameful, seemingly inescapable, and ultimately brings death.

As Christians, we are set free from sin as our master. But that doesn’t mean we experience sinless perfection, nor does it mean we are fully free from temptation. Paul’s emphasis is on the moral incongruity of recklessly choosing sin after being forgiven in Christ. The heart of the question is expressed Romans 6:1: “Shall we sin to our heart’s content and see how far we can exploit the grace of God?” (Phillips). Paul declares that this a ghastly thought! Once we have been set free from the sin which held us captive, it should be unthinkable that we would then try to manifest our freedom in a life which disregards God, His law, and His purposes for us.

In choosing to be free from the mastery of sin, we have chosen to enter the service of righteousness. Paul writes, “Just as you once presented your members as slaves to impurity and to lawlessness leading to more lawlessness, so now present your members as slaves to righteousness leading to sanctification” (Rom. 6:19–20). Our service to righteousness is not a suggestion; it is a command. It is not extra credit; it is pass-fail, baseline stuff. In other words, we are to live in accordance with what we are.

“Freedom from sin” is not some sort of euphemism for a restrictive and prudish lifestyle. It means freedom from a pursuit that is profitless, shameful, seemingly inescapable, and ultimately brings death.

The Christian life is about radical change as the result of God’s activity within the believer—and obedience is a key indicator of that change. Jesus said, “If you love me, you will keep my commandments” (John 14:15). Holiness is a devotion of heart, mind, body, and will. Christians live in a way that pleases God not from terror of what God will do to us but rather from gratitude because of what God has done for us.

As believers, we are in Christ’s employment. We are slaves to the beauty and loveliness of righteousness. And the rewards are great: “Now that you have been set free from sin and have become slaves of God, the fruit you get leads to sanctification and its end, eternal life” (Rom. 6:22).

What we choose to obey is what we belong to. We can’t be in the service of sin and in the service of obedience at the same time. Our actions, not our words, will reveal our condition. So it is important for us to consider: Are we living in accordance with what we profess? Does the use of our time, money, talents, and resources concur with our declaration of the radical change Jesus Christ has wrought? Do our relationships harmonize with our obedience to Christ? Are we living out the reality of what we are?

Christians live in a way that pleases God not from terror of what God will do to us but rather from gratitude because of what God has done for us.

If sin has us in its grasp, we do not need a little bit of cuddling and soft music to make us the Christians we’re supposed to be. Rather, as Martyn Lloyd-Jones reminds us,

Holiness is a matter of service, not of feelings and subjective moods and states, not a matter of experiences. … We must look at these things more in terms of God and His glory, and the great campaign which He inaugurated through the Son of His love, and which He is going to bring to a triumphant conclusion.1

The choice is ours: we can remain in sin and shut out the truth of God’s Word, the demands of holiness, the blessings of fellowship, and the realities of biblical truth, or we can get down on our knees and repent. Then the cloud of sin which mars our enjoyment of relationship with the Father will dissipate, and we will press on in the joy and freedom found in Christ.

This article was adapted from the sermon “The Paradox of Christian Freedom” by Alistair Begg. 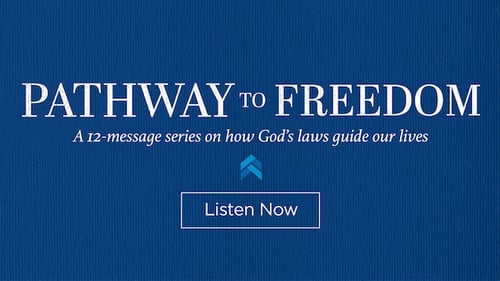