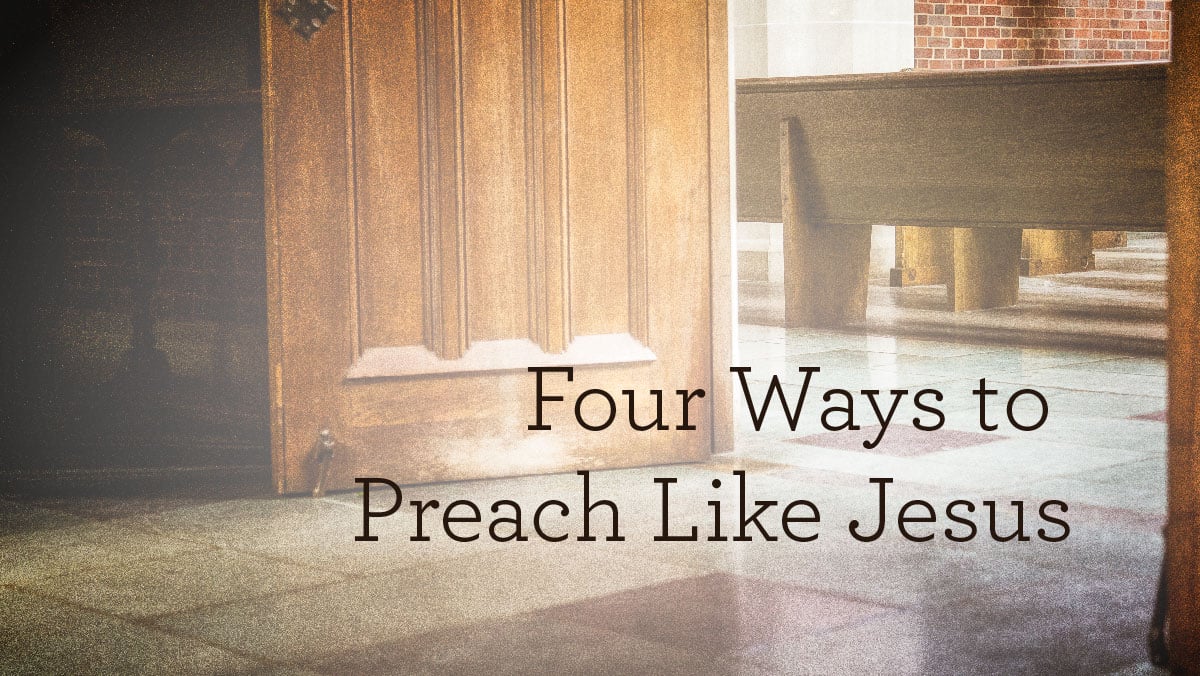 In the years of His earthly ministry, Jesus’ primary task was to proclaim God’s word. He also came to heal the sick, feed the hungry, and work wonders, but He Himself was clear about the highest priority: “I must preach the good news of the kingdom of God … for I was sent for this purpose” (Luke 4:43). At the heart of Christ’s ministry was His role as a teacher. In this, He is the model to all of us who are called to do the same. It is good—and humbling!—for us to learn from the example of Jesus so that we might assess ourselves against it.

If today’s preachers and teachers of God’s Word would strive to preach like Jesus, what kind of lessons might we learn from the Master?

When Jesus spoke, nobody responded with a shrug. They were either drawn to Him or repulsed by Him. When we take up the Scriptures and declare the whole counsel of God, shouldn’t we aim for a similarly clear response? If we dare to preach as Jesus preached, some people will be scared, others will be offended, and some will believe—but few if any should find themselves indifferent. The worst of responses to the teaching of the Bible is “Who cares?” When we set forth the Bible, it ought always to be a crossroads in the lives of our hearers.

John Murray insisted that true preaching is “a personal, passionate plea.” He got this from the apostle Paul, who made such an appeal to the Corinthians: “We implore you on behalf of Christ, be reconciled to God” (2 Cor. 5:20). Such urgency should mark all preachers of God’s Word.

When Jesus spoke, nobody responded with a shrug. They were either drawn to Him or repulsed by Him.

2. Let Christ be the offense.

When Jesus walked into the synagogue in Nazareth and read from the scroll of Isaiah, He caused quite a stir. He declared Himself to be the fulfillment of Isaiah’s prophecy, and then He proceeded to identify His hearers with the Israelites who were passed over in the time of Elijah and Elisha. The response was that “all in the synagogue were filled with wrath,” leading them to attempt to throw Him down a cliff (Luke 4:28–29). They did not respond this way because they were confused. They responded this way because they understood what Jesus was claiming.

The offense was due both to what Jesus said and to who He claimed to be. In our preaching, we should strive to let any offense be due not to our stubbornness or unnecessary provocations but to our clarity on who Christ is and what He’s said in His Word.

3. Let God determine the means and the ends.

When Jesus read the collective minds of those in the synagogue, He said, “Doubtless you will quote to me this proverb, ‘“Physician, heal yourself.” What we have heard you did at Capernaum, do here in your hometown as well.’” In other words, Jesus knew that these fellow Nazarenes would demand that He replicate in Nazareth the great works He’d done in other places. But Jesus did not let the crowds determine the course of His ministry. He did not always give people what they wanted, but He did always give them what they needed.

For those who teach and preach the Scriptures, there is a steady temptation to cater to what people want to hear. Paul warns Timothy that there will be people who on account of their “itching ears … will accumulate for themselves teachers to suit their own passions” (2 Tim. 4:3). We must not teach in accord with the passions of our hearers but instead trust the means God has given: the preaching of the whole counsel of God.

Jesus did not let the crowds determine the course of His ministry. He did not always give people what they wanted, but He did always give them what they needed.

If we trust God with the means, then we trust Him with the results as well. We do not know who God will edify or save through our labors. Perhaps, as is often the case in Luke’s Gospel, God will bless those seemingly furthest away. We may be called to reach a Zarephath or a Naaman, going after the one while the ninety-nine are safe.

4. Preach the exclusivity of Christ.

Jesus does not play nice with rivals. If He did, the Roman pantheon would have included Him. And if early Christians had thought Jesus was merely a good option among many, they would have made a lot more friends than they did. But that’s not how Jesus is to be preached. Christ Himself boldly said, “Truly, truly, I say to you, before Abraham was, I am” (John 8:58), and “I and the Father are one” (John 10:30).

The apostles and early disciples followed suit, insisting that Caesar was not lord but that universal lordship belongs to Jesus Christ alone (e.g., 1 Cor. 8:6). This is an exclusive claim. And how was it received by the Roman powers-that-be? They responded with persecution, reputedly going as far as to turn the early Christians upside down, stick their heads in the ground, and set fire to them. Yet as the saying goes, the blood of the martyrs has proven to be the seed of the church.

We should not pursue martyrdom, but we should absolutely preach with the same unyielding commitment to the lordship of Christ as those who gave their life for the Gospel. We are not called to make friends or to make our hearers feel good about themselves. We are called to make disciples and to preach Christ as Lord of all.

If you are one of God’s chosen servants who has the privilege and responsibility of preaching, then preach like our Lord Jesus, for He is both the example and the substance of our preaching. If we declare His Word with the urgency and God-centeredness we see in His own ministry, we can rest in the integrity of our own ministry and trust the Good Shepherd with the outcomes.

This article was adapted from the sermon “This Scripture Is Fulfilled” by Alistair Begg. Subscribe to get weekly blog updates.