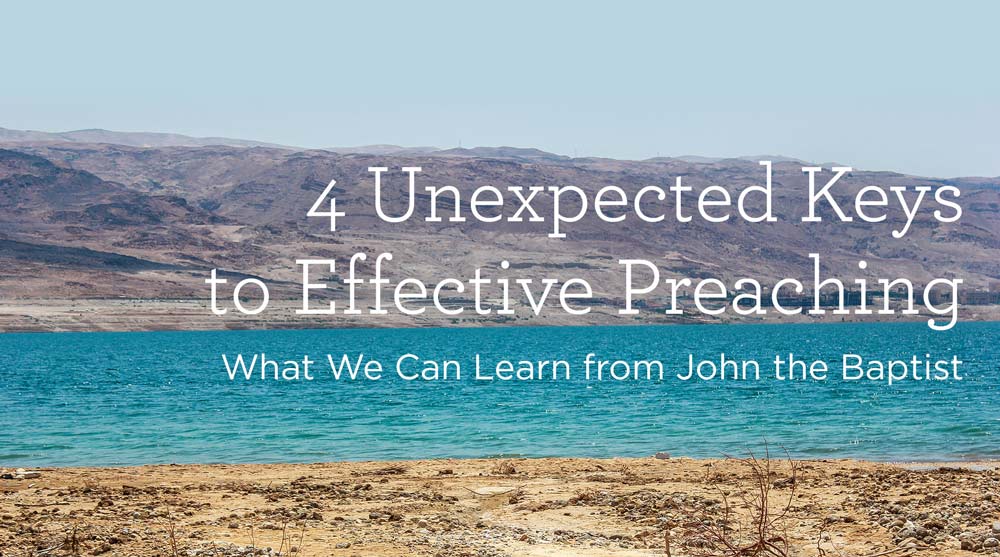 It’s not uncommon for preachers to daydream about success in pastoral ministry. Every pastor wants to make a difference in the kingdom of God, and it’s easy for pastors to envision the perfect ministry situation in which they could really be used by Him. Indeed, it’s very easy for any of us—pastor or not—to think that there exists a “perfect” place to work. We think that if we can just be in that place, then we could really serve the Lord to the best of our abilities.

In the Gospels, John the Baptist is portrayed as a remarkable preacher who experienced remarkable success. He was extremely popular. In Luke 3:7 we are told, “The crowds … came out to be baptized by him,” and in Matthew 3:5 we read that “Jerusalem and all Judea and all the region about the Jordan” went out to meet him. (Mark says something similar; see Mark 1:5.) John wasn’t preaching to a trickle of curious spectators. It wasn’t one or two people saying, “You know, maybe we should go and hear what this new preacher is saying.” No, the whole countryside was going to hear him en masse!

This description fits perfectly with what most pastors hope for in their preaching ministries. Yet in many ways, John’s method was nothing like what are offered today as the keys to building a successful and numerically strong preaching ministry. He was not in a lovely suburban corner with plenty of parking, freeway visibility, and easy access. He was not in a prime location. No, he was ministering in the Jordan wilderness, a location that commentator R. C. H. Lenski describes as a “hot, uninhabited depression which is wild in every way and removed from all civilization.”1

You may think that your context of ministry seems poor, but it’s unlikely to compare with John the Baptist’s. Few have even come close to that. What a reminder that there truly is no ideal place to serve God except the place in which he sets us down! We have to abandon the idea of ministering in the ideal—the ideal place, the ideal congregation. There is no such place, and there is no such congregation. There is only that to which God calls us.

“There truly is no ideal place to serve God except the place in which he sets us down!”

John the Baptist not only chose an interesting place to preach, but he also had a peculiar diet and dress. His clothing, we’re told, was “a garment of camel’s hair and a leather belt around his waist,” and “his food was locusts and wild honey” (Matt. 3:4). He didn’t look and act the way most of us would expect a successful preacher to look and act. He definitely wouldn’t have been caught wearing a navy blazer and a striped tie. No, he was an odd individual. He stood out—and not necessarily in an attractive way!

John the Baptist’s impact as a preacher can’t be explained by the clothes he wore or the place he served. His preaching was influential because of his message. In Luke 3:2 we read that “the word of God came to John the son of Zechariah.” He who described himself as “the voice of one crying out in the wilderness” (John 1:23, emphasis added) received the word, which in turn gave meaning and purpose to the voice itself.

What is it that gives your voice significance as a preacher? It is when the word of God has come to you. It is when you are a mouthpiece of His message. John the Baptist would have been unheard of in biblical history were it not for the fact that the word of God came to him. And when it came to him, he then went with the word.

One of the reasons so much preaching is ineffective is that some individuals are going, as it were, without ever truly having received the word like John—without ever having had a sense of call or an accompanying sense of God’s word effectively being communicated through them to others. We can all say something, but there is all the difference in the world between saying something and having something to say.

Jesus said about John the Baptist, “This is he of whom it is written…” (Matt. 11:10). In other words, “If you’re wondering who this is, just go back and read your Old Testament Scriptures, and you’ll read that there is someone who is meant to ‘prepare the way of the Lord’ (Is. 40:3). If you’re wondering who he is, read your Bible, and you’ll discover that he possesses divine authority.”

When the religious leaders of the day eventually came out into the wilderness to hear John preach, he stood up and challenged them: “You brood of vipers! Who warned you to flee from the wrath to come?” (Matt. 3:7). Now, frankly, he had no basis upon which to say such things apart from divine authority. He was God’s man, in God’s place, with God’s word. That is the only basis for your authority as a preacher. Any attempt to create authority by means of personality, ministry context, or anything else is destined to crumble to dust.

In Acts 20:28–30, the apostle Paul warns the Ephesian elders that teachers will arise and draw away people after themselves; they will try to make people their disciples. Did John the Baptist do this? No—but his disciples were tempted with this mindset! They recognized that great crowds were flocking to Jesus, and they grew envious (John 3:25–26). Yet John responded by saying, “He must increase, but I must decrease” (John 3:30). In other words, “This is not about me; this about Him!” Perhaps the reason that many of us are less effective than we otherwise might be is because too much of what we do is about “me” and not enough of it is about God.

“Perhaps the reason that many of us are less effective than we otherwise might be is because too much of what we do is about 'me' and not enough of it is about God.”

We can also see John the Baptist’s integrity in the fact that he was prepared to call sin what it is. In Mark 6:17–18, John is straightforward in his encounter with Herod: “Herod … had sent and seized John and bound him in prison for the sake of Herodias, his brother Philip’s wife, because he had married her. For John had been saying to Herod, ‘It is not lawful for you to have your brother’s wife.’” There went any possibility of John having a nice big church somewhere close to the palace! He wasn’t about to become the chaplain to Herod’s inner circle, but he had to say what he had to say. He wasn’t concerned about gaining the approval of men, even some of the most powerful and influential men of his day. He was committed to God’s truth. That’s what it looks like to have personal integrity.

John the Baptist was also self-effacing. You could never say that he was a wimp; in fact, he was a lionheart. But he didn’t preach to magnify himself, nor did he try to create a personal following. “But,” you say, “he did create a personal following.” Yes, he did—because God chose to use him as an effective preacher. He was God’s man with God’s word for that time. So he stood up, and he exercised his ministry with a boldness that was divine, with an integrity that was real, and with a humility that was tangible.

“Humility in the form of self-forgetfulness is one of the keys to effective pulpit ministry.”

I think if we would have been around John the Baptist, we could have almost tasted his humility. We read of a man who, when he built a significant following, directed his disciples to the Lord Jesus instead. John understood his role: he was to prepare the way and then get out of the way. Humility in the form of such self-forgetfulness is one of the keys to effective pulpit ministry.

Finally, John’s message was straightforward and clear. No one was in any doubt when they heard him preach, because his words were marked by total simplicity. Even when he addressed the issue of sin in the life of Herod, he didn’t complicate his message with obscure speech or dance around the issue at hand. He didn’t give him some great treatise or diatribe on the psychological analysis of the impact of marital infidelity on the psyche of a king. Instead, he spoke plainly and directly, confronting sin and calling for repentance.

Billy Graham was a farm boy with only one theological degree, but he preached the Gospel to large crowds all over the world. God worked through him because he was a man who understood the Bible’s authority and always came back to the phrase “The Bible says…” He was marked by total simplicity.

May our prayer be that the Lord would help us to pattern our ministries after individuals such as John the Baptist. His location, diet, and clothes may have been remarkable, but we have the most to learn from his authority, integrity, humility, and simplicity.

Pastor, your labor in the Lord is not in vain. Our God uses strange people in strange places to do remarkable things. Follow in the footsteps of men like John the Baptist, and you will surely be considered a success by the only one who matters: He whom John himself proclaimed as “the Lamb of God, who takes away the sin of the world!” (John 1:29).

Adapted from the sermon "The Preacher: John the Baptist" by Alistair Begg