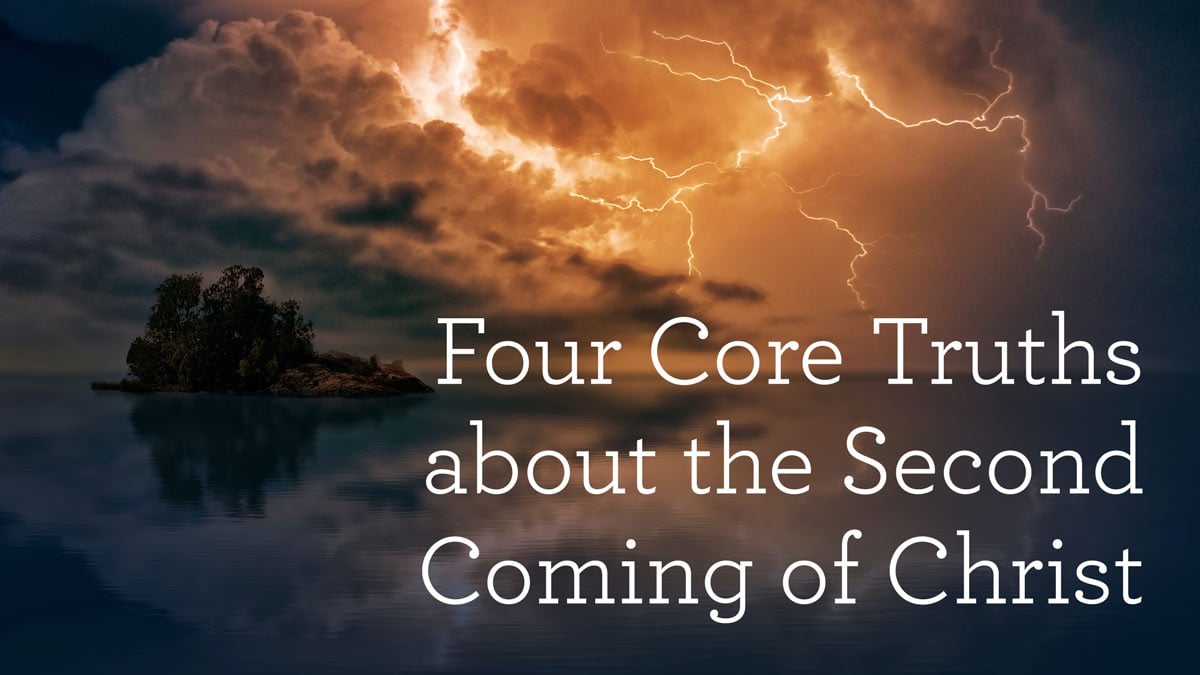 The second coming of Jesus Christ is absolutely foundational to the Gospel, which concerns not only the birth, life, death, resurrection, and ascension of God the Son but also His return. This event and the doctrines that surround it are integral to “the faith that was once for all delivered to the saints” (Jude 3).

Though Christ’s return is both a main thing and a plain thing in Scripture, enough views on the second coming have circulated over the years to cause confusion and, indeed, to induce conflict among those who share convictions about Scripture’s inerrancy and the event’s imminency. This meditation is intended not to cut through that conflict and assess these various views but to point out what is irreducibly true about Christ’s promised return.

For all the disparate viewpoints regarding Christ’s second coming, what does Scripture help us see clearly?

First and foremost, the day when the second coming will happen has not been disclosed; it is secret and will remain so until the parousia—that is, Christ’s reappearing. Mark 13:32 makes this very plain for us:

But concerning that day or that hour, no one knows, not even the angels in heaven, nor the Son, but only the Father.

If the divine Son Himself doesn’t know the timing the Father set, then how can any of us begin to prognosticate about the day or hour? When earnest study of eschatology devolves into end-times hype and predictions (accompanied with book deals, of course!), then we know we have crossed the obvious boundaries of Scripture. What we can say for sure is that “the Son of Man is coming at an hour you do not expect” (Luke 12:40).

2. His appearing will be sudden.

Acts 1:11 is a key text for the sudden nature of Christ’s appearing. After Christ’s ascension to heaven, angels appeared to the dazed disciples and asked,

Men of Galilee, why do you stand looking into heaven? This Jesus, who was taken up from you into heaven, will come in the same way as you saw him go into heaven.

Christ will return bodily, visibly, and suddenly. As He went up to heaven, so He will return to earth. Perhaps it will be just another day at the office for people, just another day in the fields. People will be having their weddings that day, having surgeries, dropping their children off at school—all in just the same way they did the previous day and the way they will expect to do the next (Matt. 24:37–41). But there will be no tomorrow—at least, not like we have ever known.

3. The event will be spectacular.

Christ’s second coming will also be markedly different from His first. The shepherds had to go seek out the Son in the manger (Luke 2:15–16), and the three wise men had to inquire with Herod, the king in Jerusalem (Matt. 2:1–2). Christ’s second coming won’t be like that at all. Then, it was ignominious and inconspicuous. When He returns, it will be startling and spectacular:

The Lord himself will descend from heaven with a cry of command, with the voice of an archangel, and with the sound of the trumpet of God. (1 Thess. 4:16)

Jesus’ return will prove unmistakable as it bends and breaks the limits of space and time as we know them. We cannot predict the hour, but surely no creature will be left unaware when the Lord of Lords and King of Kings returns to rescue His people and conquer the rebellious (Rev. 17:14).

We cannot predict the hour, but surely no creature will be left unaware when the Lord of Lords and King of Kings returns to rescue His people and conquer the rebellious.

4. His return will bring separation.

Finally, Christ will return in judgment—“to judge the living and the dead,” as the Apostles’ Creed and Nicene Creed have it. Christ’s inaugural mission was not to condemn but to save (John 3:17). At His return, however, He will separate the faithful from the rebellious (Matt. 24:38–41). Christ’s sheep will inherit “the kingdom prepared for [them] from the foundation of the world” (25:34–40), but those who did not love Christ and their neighbors as our Lord prescribed will depart into the fires of eternal punishment (25:41–46).

While these four truths are certain, they are not simply ideas to ponder. The prospect of our Lord’s imminent return should change how we live now; it ought to affect us today. The apostle John makes this plain for us:

Beloved, we are God’s children now, and what we will be has not yet appeared; but we know that when he appears we shall be like him, because we shall see him as he is. And everyone who thus hopes in him purifies himself as he is pure. (1 John 3:2–3)

We are not yet perfect, as is our destiny; but anyone who tethers their hope to heaven will come to know the kingdom’s purifying effects. In other words, a person who professes Christ and believes in His coming will increasingly align their life with the Lord’s. If someone is living an immoral life and they want to give you a book about all the drama of the return of Jesus, there’s a good chance they don’t really believe what Scripture says about the return of Jesus!

We are not yet perfect, as is our destiny; but anyone who tethers their hope to heaven will come to know the kingdom’s purifying effects.

As it changes how we live, the second coming also promotes urgency in our evangelism. That day when Christ returns in power is glorious indeed, but it will also prove terrible for those who do not know Him. So if you have a friend, neighbor, coworker, or loved one who has not yet placed their hope in Christ, why not share with them the everlasting life and joy found in Him?

The apostles seemed to speak as if the parousia was so near—yet two thousand years removed from the events and writings of the New Testament, we still await our Lord’s return. When we’re tempted to grow impatient, we need to remember this important truth:

With the Lord one day is as a thousand years, and a thousand years as one day. The Lord is not slow to fulfill his promise as some count slowness, but is patient toward you, not wishing that any should perish, but that all should reach repentance. (2 Peter 3:8–9)

Our sovereign God stands outside of time. The span of two millennia, let alone eternity, is practically inconceivable to our minds. But from God’s perspective, it may as well be the second day after Christ’s ascension. When impatience wells up in us, we ought to remind ourselves that God, in His inexhaustible providence and compassion, is supremely patient—more so than we deserve. Still, whatever the day or hour, and however far off it seems, Christ Himself has testified, “Surely I am coming soon.” And all God’s people respond, “Amen. Come, Lord Jesus!” (Rev. 22:20).

This article was adapted from the sermon “Be Patient, the Lord Is Coming — Part Two” by Alistair Begg.