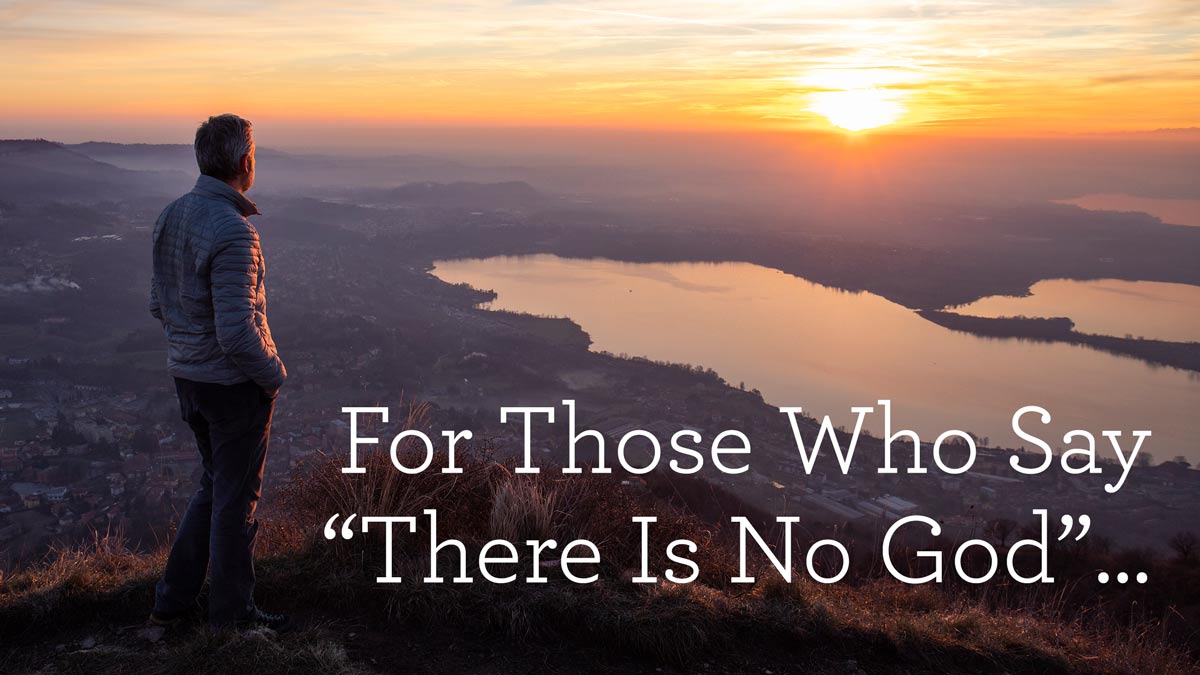 Human life is unintelligible apart from God. Try as we might, not a single soul can truly understand its place in this world without knowing this world’s Architect.

We in Western society find ourselves living in a time when an increasing number of people claim there is no God. Yet while the religiously unaffiliated—or “nones,” as some call them—might be growing in number today, denying God is not a new phenomenon. In fact, the declaration “There is no God” is recorded in Scripture itself.

When King David penned Psalm 14, he apparently observed rampant godlessness around him:

The fool says in his heart, “There is no God.”
They are corrupt, they do abominable deeds;
there is none who does good. (v. 1)

Notice that David describes this declaration—“There is no God”—as coming from the heart, which Scripture speaks of as the very fulcrum of our existence. The true condition of a man or a woman may be understood by hearing their heart, for, as Jesus says, it is “out of the abundance of the heart” that “the mouth speaks” (Matt. 12:34).

Aldous Huxley, who epitomized atheistic thought in the early twentieth century, was honest enough to assert that he “had motives for not wanting the world to have a meaning”1—motives that, in the end, turned out to include sexual and political liberation. In other words, he joined countless others who say, “I don’t want there to be a God. For if there is a God, then I have a sneaking suspicion that He has something to say to me—and the first thing that He has to say may not be something that I want to hear.”

God “has put eternity into man’s heart,” but in our stubborn, self-serving nature, we will suppress the plain truth about Him ad nauseam.

We find similarly warped and wishful thinking like this in Job 21:14–15, which describes the wicked who have reaped great material blessings and comforts:

They say to God, “Depart from us!
We do not desire the knowledge of your ways.
What is the Almighty, that we should serve him?
And what profit do we get if we pray to him?”

God “has put eternity into man’s heart” (Ecc. 3:11), but in our stubborn, self-serving nature, we will suppress the plain truth about Him ad nauseam.

Yet denial of God doesn’t always take the shape of explicit protest through words. Sometimes our actions speak for us—e.g., when we leave God out of our calculations or plan our lives without reference to Him. As Romans 1:18–21 lays out for us, the issue is not that we don’t know God. We certainly do. Rather, the problem is that we “suppress the truth” that creation makes so plain and do “not honor him as God or give thanks to him.”

With all of history a seemingly endless mutiny, we may be tempted to question God’s ability to hold His plan together, or at least pity Him. But God is in no way diminished by even the most notorious denials. He is not “served by human hands, as though he needed anything” from us (Acts 17:25). “The earth is the LORD’s and the fullness thereof, the world and those who dwell therein” (Ps. 24:1); not even the most hard-hearted rebel “can stay his hand” (Dan. 4:35).

With all of history a seemingly endless mutiny, we may be tempted to question God’s ability to hold His plan together, or at least pity Him. But God is in no way diminished by even the most notorious denials.

Yet even though He doesn’t need us, our gracious God isn’t content to watch us decay in our rebellion. No, He desires to grant steadfast love and mercy—even to those who have rejected Him. Who qualifies for such grace? Beautiful people? Brilliant people? Law-abiding people?

The good news for the rebellious is that God is not looking for some merit in us. Instead, He is seeking those who are willing to admit their demerit, their need, before Him. As the apostle John assures us, “If we confess our sins, he is faithful and just to forgive us our sins and to cleanse us from all unrighteousness” (1 John 1:9).

It isn’t brawn or brains or beauty that draws God’s gaze. God Himself says He will look to the one who is “humble and contrite in spirit” and who trembles “at my word” (Isa. 66:2). Even if you’ve said to Him, “Leave me alone, God, I want nothing to do with you,” His grace is sufficient for you—if you are humble enough to admit to your rebellion and confess your need for Him.

This article is adapted from the sermon “The Great Miscalculation” by Alistair Begg.