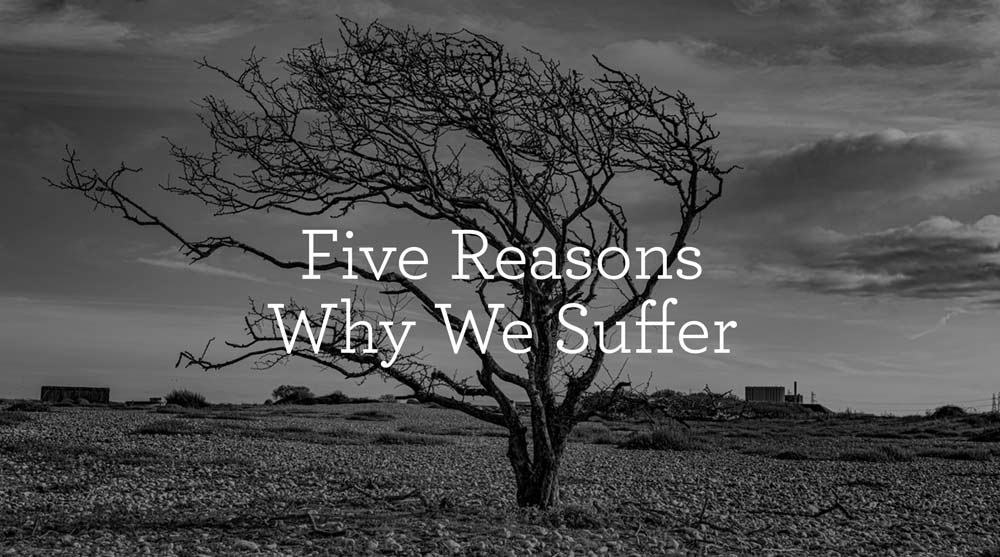 Why did God create a world in which suffering exists?

You don’t have to be a philosopher or a doubter of God’s goodness to ask such a question. Look around: everyone suffers, and everyone tries to explain why. Some may say pain is an illusion. Others may reject God, saying that suffering disproves His existence. Still others may try to redefine God, saying that suffering proves His limitations. Yet each of these explanations for suffering is, in its own way, inadequate.

Thankfully, the Bible doesn’t leave us without answers. Here are five explanations the Bible gives for why we suffer.

1. Suffering is part of being human.

Our world is imperfect. The impact of sin leads inevitably to suffering. We get hurt. We get sick. We die.

In light of that, we don’t need to read some great cosmic meaning into all of our sufferings, saying to ourselves, “Oh, I have such a sore head. I wonder what the eternal scheme is in relationship to this?” It’s just the fact that we live in a fallen world. If we step on a rake and it hits us on the side of the head, we don’t need to wonder what God is teaching us. We just need to watch where we’re walking next time!

In Psalm 119:67, the psalmist writes, “Before I was afflicted I went astray, but now I keep your word.” When everything seems to be fine, sometimes we’re tempted to go our own way. In those moments, we often need God’s affliction to draw us back to obedience.

This idea is repeated in the book of Hebrews, which describes God as a gracious Father who disciplines His children, correcting them so that they get back on the righteous path of His Word.1 Each of us should recognize that some of our experiences of pain and suffering have been as a result of God’s gracious, wonderful, corrective plan.

Pain, as terrible as it is, and emptiness, as real as it can be, become a blessing to us when we trust that God uses them to correct our thoughts, attitudes, and actions.

In Romans 5:3–4, Paul writes, “We rejoice in our sufferings, knowing that suffering produces endurance, and endurance produces character, and character produces hope.”

How do we become hopeful? How do our grandmothers grow to have such wonderfully tender eyes? How do our friends learn to empathize with pain, with brokenness, with wanderings? How do people grow like this? More than likely, it’s because God is using suffering to build character.

Many of those we most admire wouldn’t be who they are had God not chosen to use trials—not to punish, not even to correct, but to construct.

4. God uses suffering for His glory.

Perhaps no biblical figure’s life illustrates this truth more vividly than Joseph. From the moment we meet him as a seventeen-year-old boy to his rise to power in Egypt at the age of thirty, we see him endure jealousy, betrayal, enslavement, false accusation, and imprisonment—more suffering than most people endure in an entire lifetime. Yet as he approached his life’s end, he declared to the same brothers who had once betrayed him and sold him into slavery, “You meant evil against me, but God meant it for good, to bring it about that many people should be kept alive, as they are today” (Gen 50:20).

Joseph had learned to see God’s providence even in the face of man’s malice. Through all the injustice and all the years of imprisonment, he had a keen awareness of the theology that one day would be expressed in the words of the apostle Paul: “We know that for those who love God all things work together for good, for those who are called according to his purpose” (Rom. 8:28).

When we too face suffering, nothing will help us more than a rediscovery of the doctrine of providence and an understanding that God orders all things, controls all things, and is present in all things for our good and for His glory.

5. The purpose of suffering can be cosmic.

The story of Job is the most profound and detailed example of this principle. Job’s immense suffering was intended to demonstrate before Satan and the angels that a person can love and trust God for who He is in Himself, not merely for the good possessions he gets from Him. It only makes sense, then, that He sometimes allows our lives to be marked by suffering to show the world that His grace, mercy, and strength are sufficient for His people to endure suffering and actually grow to trust God more.


We have a very poor theology of suffering here in the twenty-first century. “Celebrity” evangelists and teachers often hype the idea that Christianity is all about health, wealth, and prosperity. But the fact of the matter is that while we may experience blessing through our obedience, we cannot manipulate a sovereign God. The same God who chooses to bless us with a beautiful sunset one day may choose to bless us with suffering the next.

The question is, are we prepared to trust Him? Will we believe in and glorify Him? Will we submit and bring our minds beneath Him, knowing Him to be our loving Father?