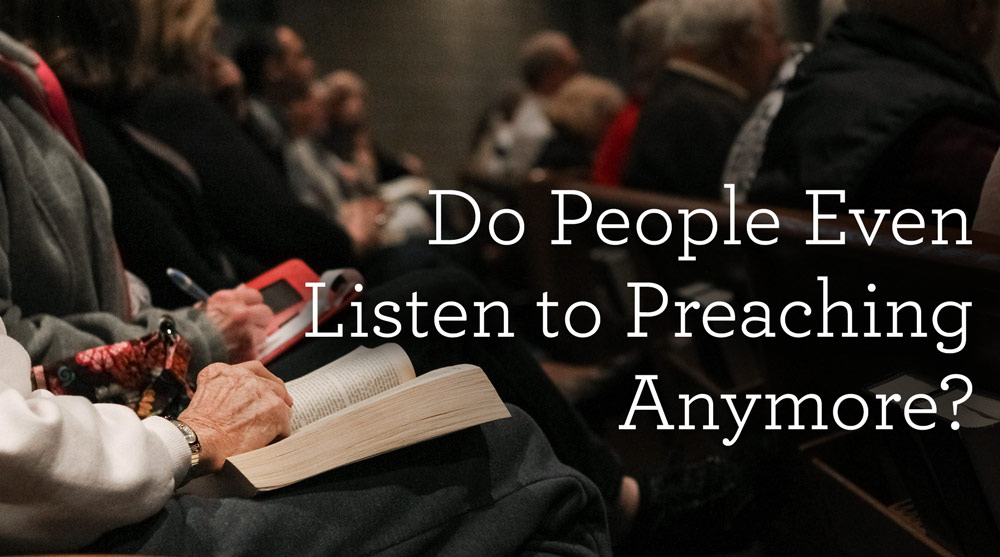 These days, preaching is under increased scrutiny. Preaching itself is often viewed as a dated practice of former generations, while preachers are challenged by people who say things like “Preaching doesn’t do any good!” and “People don’t even listen to preaching anymore!”

Many believe that long-form, one-way communication like preaching only reinforces the attitudes and beliefs people already have and rarely effects real change in someone’s life. They’ll argue that you ought to speak for only eighteen or nineteen minutes, because people can’t absorb anything longer. The implication is clear: if you want to change people’s opinions, then you need to give up on monologue and move to dialogue.

Those who argue this way may assume that Christian preaching is analogous to a marketing exercise. There is a product (the Gospel). There are consumers (the congregation). There is a salesman (the preacher). Therefore, the job of the preacher is the same as that of the salesman: to overcome consumer resistance and influence people to buy the product.

Such a mindset may be supported by statistics or surveys, but the problem with thinking that preaching is automatically ineffective as a form of communication is not ultimately psychological or sociological. It’s theological.

The salesman analogy is unhelpful in one key sense: the preacher doesn’t overcome consumer resistance. Indeed, according to the apostle Paul, he cannot overcome resistance. If you approach preaching as a salesman approaches his job, then you don’t have a hope in the world. Paul said that the Gospel is “veiled to those who are perishing” (2 Cor. 4:3). So how are we going to remove the veil?

Well, we are not!

In the parable of the sower (Matt. 13:1–23), there is one sower, and there are four soils. A communications expert today might tell the story the other way around: one soil, four sowers. The hypothetical first sower comes along and tries his technique, and it isn’t very good. The second sower tries a different technique, and it’s a little better, but still not good. Same for the third. And then, finally, the fourth sower’s technique works, and everyone is able to copy what he did and imitate his success!

But that’s not at all what Jesus teaches in Matthew 13. Christian conversion and sanctification are not the results of human persuasion; they are manifestations of divine grace. It is God who says, “Let light shine out of darkness” (2 Cor. 4:6). It is God who prepares the “good soil” to receive the seeds of Gospel truth. It is God who touches the ears of the spiritually deaf so they can hear.

“Christian conversion and sanctification are not the results of human persuasion; they are manifestations of divine grace.”

It is for this reason, and this reason alone, that preaching works. When we proclaim the Gospel, we are merely instruments in God’s hands, helping those who are already being saved by Him recognize and wrestle with the truth.

Much of the trouble with contemporary evangelism is that it is built on the assumption that anyone can and will respond to the Gospel if only it’s presented to them the right way. That’s simply not true. When it comes to preaching, it’s the nature of the soil, not the quality of the preacher, that matters. When people believe the Gospel, it doesn’t exalt the preacher; it exalts God, who has done a wonderful work in preparing the soil.

If a person responds to preaching in faith, it’s not a triumph of the preacher’s power of communication; it’s a triumph of the Spirit of God, who has secretly transformed that person’s heart. Preaching may reveal the transformation, but it cannot produce it. Preaching will be effective not because it’s the best means of communication but because it is the primary method by which God opens people’s eyes and brings them to an awareness of His grace. That is why the preacher must preach.

“When people believe the Gospel, it doesn’t exalt the preacher; it exalts God, who has done a wonderful work in preparing the soil.”

The task of evangelistic preaching, then, is to press the truth on people’s consciences in the plainest way. The question to measure its effectiveness is not How much did the unbelievers enjoy that? That’s irrelevant. Instead, ask yourself, Did they learn the truth from that? How clear was the Gospel?

It’s simply not true to say that people won’t listen to preaching. They have, and they do, and they will for generations to come! If God awakens people to their great need, they are going to listen. But until that happens, no amount of evangelistic gimmickry can make them take heed. If people are not being spiritually quickened, you can entertain them with engaging talks into oblivion, but those will never remove the veil from their eyes.

At the root of all effective preaching is a theological conviction about how the Spirit of God works in the life of an unbeliever. God’s Spirit mysteriously moves to reveal Jesus and create faith in human hearts through the preaching of the Word. That is what should drive us to preach.

“Preaching doesn’t do any good.” Yes, it does. “People won’t even listen to preaching these days!” Yes, they will. Try preaching, and see what happens! How amazing that, as Calvin wrote, God “deigns to consecrate to himself the mouths and tongues of men in order that his voice may resound in them.”1 God has chosen to save sinners in this peculiar way. Pastor, this is the task to which you must commit yourself. Someone’s soul depends upon it!

Adapted from the sermon “Practical Pointers on Preaching” by Alistair Begg