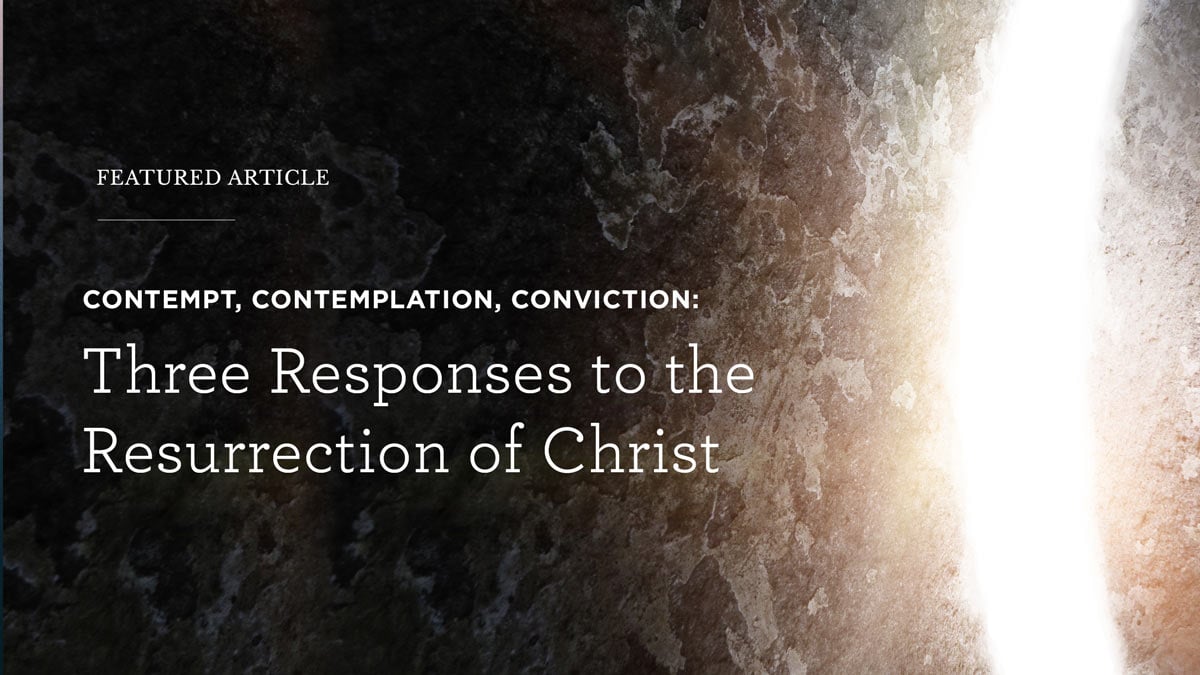 The historicity of Jesus’ death by crucifixion is widely accepted. Jesus’ resurrection, on the other hand, is still met with doubt. Everyone dies, after all, but very few people in history, even as the Bible records it, have experienced someone coming back from the dead. So from the beginning, the resurrection, and particularly its implications, has proven a stumbling block for many.

When the apostle Paul preached Jesus’ resurrection to the philosophers of Athens, their response was threefold: some mocked, others wanted to hear and consider more, and some believed (Acts 17:32–34). These three responses are the same responses that many have to the resurrection today.

In response to Paul’s Areopagus sermon, some of the Athenians thought, “Nobody in their right mind would believe this!” Theirs was the response of incredulity and skepticism: “How could anyone believe in the physical, literal bodily resurrection of Jesus of Nazareth from the grave?” But was there really an alternative? There’s no question that Jesus’ tomb was empty; even His enemies admitted that (Matt. 28:11–14). And hundreds of people saw the dead man alive again (1 Cor. 15:4–6).

From the beginning, the resurrection, and particularly its implications, has proven a stumbling block for many.

The incredulous faction trots out the same explanations year after year—but upon close inspection, they simply don’t hold up. One suggestion they offer is that the women who found Jesus’ tomb empty went to the wrong tomb. Did no one think to correct them? Some say Jesus’ enemies stole His body. But why wouldn’t they produce it in the face of the resurrection story? Others say the disciples stole the body. But the disciples had all run from the authorities when their leader was alive; they weren’t about to boldly steal His dead body from under the nose of armed guards. There are many more such excuses for disbelieving the resurrection—and many more reasons to doubt those excuses.

Some people come by doubt honestly and only need to seize an opportunity to think through their questions. But true mockers often hold on to skepticism because they cannot accept the alternative: the reality that Jesus Christ is Lord. Such was surely the case for the renowned atheist Aldous Huxley, who wrote, “I had motives for not wanting the world to have a meaning.”1 In other words, he decided he did not want to believe in God, because that meant he could believe and do as he pleased. The mocking response does not sincerely seek truth but seeks to remain undisturbed by the implications of Jesus’ resurrection.

“Others Said, ‘We Will Hear You Again’”

Some of the Athenians, however, responded with personal inquiry—thinking, examining, and pondering. This is a response that takes the Bible seriously, or at least considers what it says. In fact, this was the disciples’ first reaction to the news of Jesus’ resurrection. When the women came to tell them that the tomb was empty, they wondered if they could really believe it (Luke 24:11–12).

Peter and John raced to the tomb to see for themselves. John wrote that he “went in, and he saw and believed,” even though he “did not understand the Scripture, that [Jesus] must rise from the dead” (John 20:8–9). John’s faith was grounded in what he saw and did not see in the tomb—but he was honest enough to tell us that he had not yet put two and two together.

Thomas wasn’t with the rest of the disciples when they first encountered the risen Christ. He said he wouldn’t believe unless he could see and touch Jesus’ wounds—and so Jesus graciously came to Thomas and allowed him to touch His hands and side (John 20:24–28).

John’s faith was grounded in what he saw and did not see in the tomb—but he was honest enough to tell us that he had not yet put two and two together.

Jesus had explained His death and resurrection beforehand to the disciples on multiple occasions, but they still did not understand it when it happened. They had to examine and consider both Jesus’ teachings and the circumstances surrounding His death and resurrection. Their understanding and belief came only as Jesus revealed Himself to them and as the Spirit worked in their hearts and minds.

People take the pondering approach to resurrection because one can’t simply push aside unbelief and put on faith at will. Belief often takes time and consideration. Those who find themselves in this place of inquiry should continue considering all that God has revealed in His Word. And by God’s grace, transformation will come as He reveals Himself, because ultimately, it is only through the work of the Holy Spirit that anyone comes to saving faith.

Finally, some of the Athenians responded to Paul’s preaching with surrendered belief. Not only did they believe that Jesus rose from the dead, but they also entrusted themselves to Him as a personal Savior.

This sort of conviction is the reason Paul and the other apostles preached Christ. In fact, when John wrote about Jesus’ death and resurrection, he said that he was doing so “so that you may believe that Jesus is the Christ, the Son of God, and that by believing you may have life in his name” (John 20:31). Belief is a key part of the path that God has laid down to life and salvation in Jesus Christ. God changes men and women as they begin to live in the light and hope of the resurrection. And as Paul told the Athenians, God has assured us of His promises by raising Christ from the dead (Acts 17:31).

Jesus asks the same question of each of us: “Do you believe that I am the resurrection and the life?”

It is God’s Spirit who shows us what and who we are through His Word. On our own, none of us can make these sorts of deductions and expressions. We can listen to endless sermons and read countless books, but we will never believe unless God’s Spirit transforms and renews our minds as we hear His Word. No one can boast about their faith, because—as has already been said—it is the Spirit alone who transforms mockers and ponderers into true and faithful believers.

“Do You Believe This?”

The Gospel of John contains the account of Jesus raising a man named Lazarus from the dead. Before He did so, He said to Lazarus’s sister Martha, “I am the resurrection and the life. Whoever believes in me, though he die, yet shall he live, and everyone who lives and believes in me shall never die. Do you believe this?” (John 11:25–26).

In God alone is the power of resurrection from the dead. So Jesus asks the same question of each of us: “Do you believe that I am the resurrection and the life?” As you consider your answer, make an honest inquiry, and be prepared for more than your mind to be changed. Jesus wants more than mental assent to the historicity of the resurrection. He calls us to believe.

This article was adapted from the sermon “It Is Finished!” by Alistair Begg.