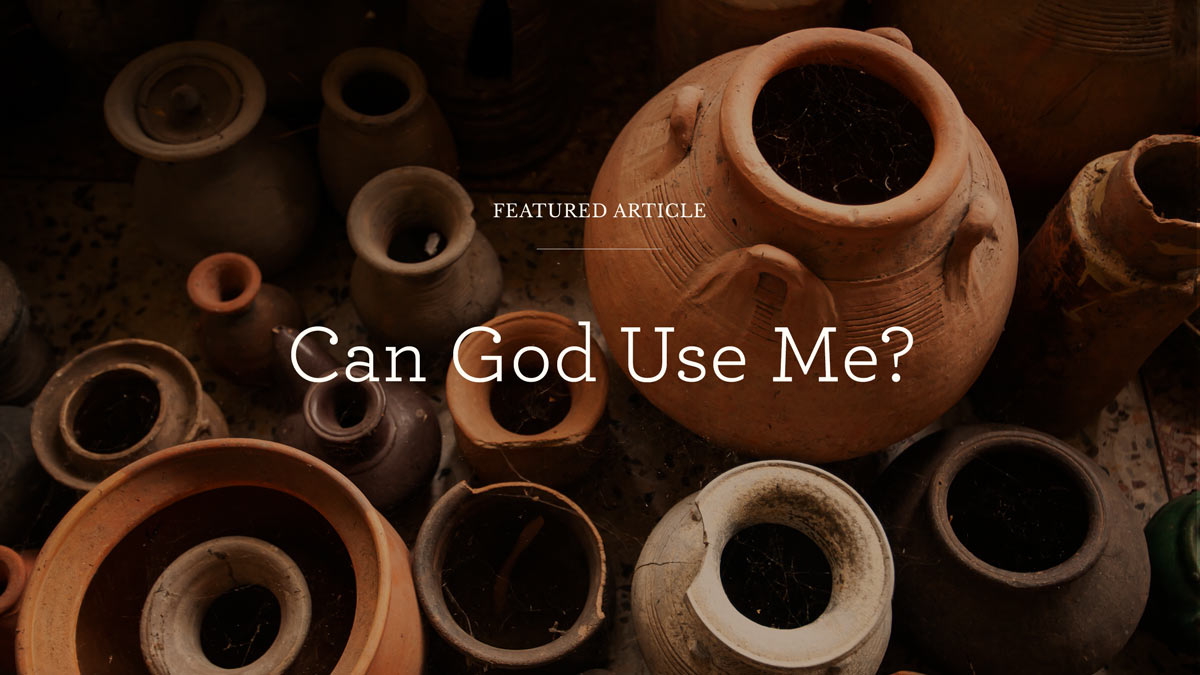 You can probably think of someone who seems like just the sort of person God would use—someone, say, with fantastic gifts and an attractive personality. Perhaps you’ve wished you were like that person or that you had this gift or that quality so you could be more useful for Christ. Yet while it’s good to want to grow, we must remember: we often don’t measure usefulness the way God does.

God specializes in revealing His power through people who appear weak, fragile, and frail. Paul made this clear when he wrote about the “treasure” of being called to proclaim “the light of the knowledge of the glory of God in the face of Christ.” He said, “We have this treasure in jars of clay, to show that the surpassing power belongs to God and not to us” (2 Cor. 4:6–7).

In Paul’s day, clay jars were of lowly use and easily discarded—more like a plastic grocery bag than like an expensive vase. You wouldn’t keep valuables in them. But God does! He puts the treasure of His Gospel in “clay jars” like us so that there can be no doubt that it’s the treasure, not the package, that is truly valuable. In other words, it’s precisely our frailty, finiteness, and weakness that make us usable in the hands of God.

God’s Treasure in Timothy, a Jar of Clay

Listing every example of God using imperfect and frail people would mean retelling the whole Bible. The patriarchs, judges, kings, prophets, disciples, and every believer after them knew what it was to be a “clay jar” in which God placed His treasure. But one particularly poignant example of God’s use of a surprising vessel is Paul’s protégé, Timothy.

Paul’s letters give us insight into five of the ways Timothy was less than ideal from a worldly perspective. To begin with, he was not fit physically. Paul describes him as having stomach issues and “frequent ailments” (1 Tim. 5:23). He did not have the gift of a strong constitution to recommend him as a missionary. A modern missions organization would probably have sidelined him. But the Lord knew all about what he could and could not do. Timothy’s physical impairment was no detriment to the fulfillment of His purposes.

It’s precisely our frailty, finiteness, and weakness that make us usable in the hands of God.

Timothy was also naturally timid. When Timothy was on his way to visit the Corinthians, Paul told them, “See that you put him at ease among you” (1 Cor. 16:10), presumably because Timothy tended to be ill at ease. He perhaps was not the kind of individual who went into a room and took control. But Timothy didn’t excuse himself from involvement in ministry. He knew that his timidity was not greater than God’s power.

Thirdly, Timothy was young—young enough that Paul had to remind him, “Let no one despise you for your youth” (1 Tim. 4:12). People thought he wasn’t old enough to be such a key figure in establishing the early church and defending the faith. This meant that he was in danger of feeling inferior. And he surely faced the perils that come with youth—temptations like lust, greed, and vanity. But as he depended on God’s empowering Spirit, he found that he could still “set the believers an example in speech, in conduct, in love, in faith, in purity” (v. 12).

In addition, Timothy was vulnerable to shame. Paul had to encourage him, “Do not be ashamed of the testimony about our Lord, nor of me his prisoner” (2 Tim. 1:8). Like many of us, he cared what people thought of him. Maybe there were moments when he didn’t really want to be known for hanging around with Saul of Tarsus and preaching about Jesus. Nevertheless, Timothy could “share in suffering for the gospel by the power of God” (v. 8, emphasis added).

Finally, and perhaps surprisingly, we learn that Timothy apparently had moments when he considered quitting his ministry altogether. Paul had to remind him, “If we endure, we will also reign with him”—that is, with Christ (2 Tim. 2:12). Every believer will one day face the temptation to give up—and when we do, we will need God’s grace to keep going. When Paul urged Timothy to persevere in the face of suffering, he encouraged him, “Be strengthened by the grace that is in Jesus Christ” (v. 1).

Timothy was a jar of clay—just like everyone who is useful to God.

God stores His treasure in jars of clay—and what all those jars have in common is that they are weak and lowly, so that His strength can be put on display in and through them.

His frailties could have stopped him from having a fruitful ministry. But they didn’t. He could have taken any of them as an excuse to stay home and let someone else preach Christ. But he didn’t. Instead, he followed Paul’s teaching, conduct, purpose, faith, love, steadfastness, and more (2 Tim. 3:10–11). In other words, Timothy did exactly as Paul wrote in 1 Corinthians 11:1: “Be imitators of me, as I am of Christ.” And by doing so, God greatly used him—weaknesses and all.

God’s Treasure in You, a Jar of Clay

Be sure of this: God wants to use you too. You don’t need to wonder whether or not He wants you engaged in ministry. No Christian is exempt from the Great Commission, and God does not call anyone whom He doesn’t want to use for His purposes. There is no certain age, personality type, or physical condition that He favors more than others. God stores His treasure in jars of clay—and what all those jars have in common is that they are weak and lowly, so that His strength can be put on display in and through them.

God did not make you like the person next to you. He made you with distinct purpose! He made you as you are; He has redeemed you, knowing who you are; and He wants to proclaim His truth through you as you are renewed in the image of His Son. Whether you are a bit too bashful or overconfident; whether you’re healthy or sick; whether you’re in an office, in a factory, in the home, overseas—wherever—He wants to use you by His Spirit’s power.

God uses the weak to shame the strong. He uses what appears foolish to shame those who think themselves wise. He makes those who are last first. Like Timothy, you, Christian, are weak. But you are also a vessel of God’s own treasure. He wants to use you for His own glory. Leave excuses behind, find the place God has called you to serve, pursue faithfulness with all your heart, and then watch Him display His might through you, a jar of clay.

This article was adapted from the sermon “Can God Use Me?” by Alistair Begg.